Superstore does it again! 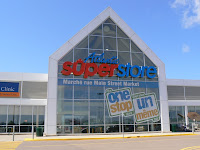 Ahh, I don't know what I'd do without my local "Atlantic Superstore"!

After my trip to EBGames this last Tuesday I had collected just over $100 of in store credit after selling a good number of games to them (something I'll never do again) and decided today; I'd return to see if perhaps they had some games I was looking for but to my disappointment I leave the place unsatisfied. They didn't have any copies of "Rainbow Six Vegas 2" (PS3), didn't know what "MLB 08 The Show" (PS3) was and claimed "God of War: Chains of Olympus" wasn't released yet with just one remaining game I was looking for; that being "Army of Two" (PS3)... so with a sigh I purchased the only game I had interest in - that they had in stock.

A brief meeting with brother and mother outside and then we take a quick trip down the road to our local Atlantic Superstore; a giant grocery/everything else store which I have gone to again and again for the best video game selection locally. I blow into the video game/electronics section, almost instantly spot a few copies of Rainbow Six Vegas 2 sitting on the shelf so I snap it up and my brother points out God of War sitting not too far from it so I snap that up too. MLB 08 had a place with a price but no cases in it's spot - but I was plenty happy finding the two other games I had been looking for. The also had Army of Two there as well, FYI. But all is not lost, as I get hope, jump on ebay and bam, snag me a copy of MLB08 for $40 (which is great considering new PS3 games around here go for $50-$70). So now I'm sitting happy with a plethora of new games to play. All praises for superstore!!!!

Havn't touched RSV2 as of the writing of this, but played a number of hours in Army of Two with my brother and it's decent. Nothing super spectacular but decent. God of War on the other hand is very very kewl! I know I'm going to have a blast playing that! MLB08 should arrive sometime late next week or early the week after.

Anyways, I've bought these games in a sort of celebration. I have just recently (this week actually) sent just over $2000 to the government to finally finish off my student loan and now I'm sitting, debt free. :D Feels good.


For the heck of it: Games I'm looking forward to and plan on getting this year (in order):