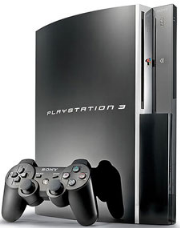 Ha, it be 4/20/08 and you know what that means! No silly, forget all about that elusive day of smoking and greenery, it is the one year point of my PS3!!! :D Exactly one year today I ventured to my local superstore to snatch up my very own 60gb model /w Resistance, Ridge Racer 7 and an extra controller. About $1000 later and I'm sitting at home, a smile on my face as I set it up and jump right into Resistance, sigh, good times :D

What's up guys? (and gals :P) It's been a while since I've last written up a blog post and it almost feels weird to do so once again. My last blog detailed Booticon's departure from Gamespot thanks to the Bull shit that's been going on at that place. IMO, Gamespot is but a shell of what it was and it continues to fall in reputation, with only you - those who I call friend picking up the slack and giving me a reason to visit it. I hope Justin (booticon) is doing well, havn't talked with him since the leave of gamespot.

Loads of new games coming down the pipeline and I couldn't be happier with them :D. I've got a few new titles since my last post, some of which are brand new games, others are gems I've recently gotten my hands on.

Frist off the new ones:

MLB08 The Show (PS3) is spectacular! IMO it's more of less a nice improvement over 07's game with some tighter controls, much nicer visuals, a kewl custom music feature and over all nice little tweaks that make it that much more enjoyable.

God of War: Chain of Olympus (PSP) is almost unbelievable! It's so nice looking and plays just as great! Very impressed by Ready At Dawn yet again (they did Daxter too). I've gotten stuck a bit on a puzzle so I've set it aside but the next game I'm going to mention has taken it's place currently.

Crisis Core: Final Fantasy VII (PSP) has got to be fav game of 08 thus far. I had big expectations for this game and they paid off! I would find myself ignoring my PS3 in favor of my PSP and this game! I've got about 12 hours into it now and just met cloud! (I do a lot of missions). Can't wait to continue the story!

Gran Turismo 5 Prologue (PS3) - My latest game, a sort of demo of sort for GT5 which is a lot of fun! I had issues with GT3 being slow to the feel of speed, but this one feels just right, even with a slow start off car. Sadly no car damage out of the box, but I read an article from Yamaguchi (Spelling?) claiming they were about 90% done closing deals with all the manufactures to allow damage modeling to the cars and it would most likely be implemented in late summer or early fall for GT5p and would be included in the release of GT5. So, it'll be something I'm looking forward to!

I've also made a trip to my local EBGames to preorder a few titles for my PS3, them being GTAIV (standard Edition), MGS4 (Limited Ed) and Haze (Standard Ed). Three games I've been looking forward to for a long time.

Now for the older, gems :D

Legend of Zelda Collector's Edition (GC) - I've been hunting for this game at a good price for a LONG time now and I just gave up and paid the $50 a seller wanted on ebay so I could have this nice little gem. It's a disc containing both Zelda titles for the NES, both for the N64 and a demo for WindWaker on the GC. I wish it had the SNES game too... but w/e. I've been playing it and it rawks.

P.N.03 (GC) - A unique game which I've discussed with a few friends which I've found for quite cheap at ebgames and so far I dig it. It features some woman who dances and shooters lasers while doing so in tons of space station corridor like environments .... a little strange but functional and enjoyable.

Chrono Cross (PS1) - Another gem found at ebgames for just $10! I havn't played much of it yet but plan to, I've heard great things about it!

Metal Gear Solid Essentials Collection (PS2) - Is really awesome! It's a box set that includes MGS (PS1), MGS2 Substance (PS2) and MGS3 Subsistance (PS2) all for $30. MGS3, which I havn't played through entirely yet will prob be the first I play as I've played MGS2 like crazy and MGS hurts my head lol, but I also plan on playing that as well.

So, suffice to say, I've got lots to play :D

Anyways, besides that life is just cruzing along, not a lot new. Just work and stuff. Oh yeah, I'm finially building my new PC, thanks to my income Tax return :D My collected parts, of which I purchased off a friend, are going to meet the other parts I've ordered from a local store and am waiting on delivery. It's been quite a bit since I've had an updated PC, so I'm stoked! StarCraft 2 here I come :D

Lastly, I've been watching a lot of movies this past week or so, here's what I thought of some:

Awake : About a man who needs heart surgery and isn't induced right so he's awake and aware for the whole thing. Interesting story, twists etc and Jessica Alba :D 7.5/10

Into the Wild : Was really just something I saw advertised on the PPV channels and decided to watch it. Kinda long in length but oh so satisfying! I enjoyed it a lot! About a guy who just graduated college and is sick of society, people, material objects etc and decides to just disappear and live off the land, eventually making his way to Alaska. 9.0/10

Bachelor Party 2 : Wow, it really took a genious to come up with this one! lol. It's your typical lame 90's take at a "funny movie" in which nobody would watch if it wasn't for the copious amout of tits. It had a few moments that made me smirk but for the most part it's a chesse ball movies about a bunch of friends and one guy's bachelor party. Nudity galore if that's all you're looking for - and Harland Williams! lol. 2/10

Tank Girl : Wow. Weird. Aparently based off the comic... it was somewhat interesting but just poorly done and the plot/characters just did nothing for me. 4/10

Beowulf : I really liked the art style, it was like a mix of real and CG and worked very well. Story was a bit different from what I thought it would be but it worked and was a fun watch, especially the dragon fight! :D 7/10

No Country for Old Men : Was really really looking forward to this due to what a lot of ppl havn't been saying about is but... alas, it's one of those titles that gets hyped up and I end up hating it. I hated the length, the speed in which is plays out, the characters, the story, hell almost everything in it! The main character's weapon was kewl and I didn't know shotguns could have silencers... but thats all I took away from this movie. 1/10

Mr. Magoriums Wonderfull Emporium : Not even sure I have the title right but a decent movie it be. For kids for sure but it worked. About a "magic" man who runs a magic toy shop with all sorts of weird stuff going on. Very interesting idea but I wish the story had more to it, it ended way to quick. 7/10

30 Days of Night : Was well done. Not totally original in story but kewl non the less. Not an "OMG I NEED TO WATCH THAT AGAIN AND AGAIN AND" movie, but I enjoyed it over all. 7/10.

Hitman : Is one of the best games to movie adaptation I have ever seen and Timmothy Elephant (SP?) is an amazing choice for Agent47! Great movie, loads of action and I don't know what it is about the main female role but damn, gorgeous! :D lol. 9/10.

Live Free or Die Hard : A kewl movie, dug the action ... tho some of it was way too unbeliveable. Willis did a good job and over all it's a nice story that plays out just right. Timmothy Elephant (SP?) again does a great job too. Best line of the movie: "Mai? Asian chick, likes to kick people? Yeah, last time I saw her she was at the bottom of an elevator shaft with an SUV rammed up her ass." - Bruce Willis. :D 8/10

We Own the Night : Was a real surprise for me! Great acting all around, very good story, action was super and the move shined the whole way thought, I loved it! 9.5/10