Ahh, it's been a while yet again since I've done a blog post! I just dun seem to have the enthusiasm to do them anymore... I guess. Well anyways, last blog I wished my PS3 a happy b-day (lol) and now it's my turn! Today (14th May, 2008) I turn the ol 22. Not much planned but, I don't have to work till next Wednesday! :D

Next Wednesday because I booked a nice week off of work to head up to New Brunswick to see my sis (who's going to school up there), do some shopping or w/e... I really dun know yet, but no work = awesome in my books. Work was a bit harsh... Sunday I believe it was... cuz I had a really good time with some cousins and others celebrating my cousin's graduation from college/uni and suffice to say we enjoyed it :D

I believe this is the first blog I've written while on my new PC (might be mistaken, but I think it is). This lil gem has been about a year or more in the making... just slowly saving up and collecting parts as I went along. But I must say, I'm pleasantly pleased with the speed and power I was able to get for around $500. So, when StarCraft2 drops I shouldn't have a problem running it. [Specs (for those interested) - Athlon64+X2 dual core 3800+, X1800XT 512mb, 3gb (forget the actual model of teh game), 250gb HD and other niceties. ] I haven't gotten much in terms of new PC games to test it out but I plan on getting Prey after what Justin has said about it. 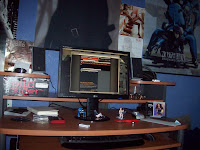 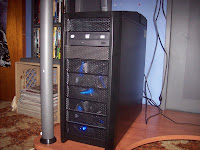 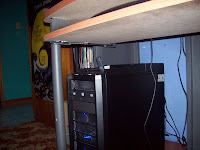 Other games currently in my line of sight include GTAIV - which is astoundingly fun, Star Wars Republic Commando which I really dig! I got it for like $8 as a jewel case at walmart thinking I wouldn't miss $8 if it did turn out a bad game but I really like it! I also got Star Wars Battlefront2 but... it doesn't work! It just crashes when I try to run it. Haven't played much else since I got GTAIV tho... lol. Haze comes out on the 20th (or something like that) and I've already got it pre-ordered so I'll pick that up then. Then June brings MGS4... which I CAN'T WAIT FOR! Great year for games!

Lastly, my GitS obsession continues to grow. Last post, I believe I noted my purchase of 4 novels set in the universe and I'm almost through 1 (haven't had a lot of free time to read). A few days ago I hit up amazon and got the 3 collection books of the original Manga (the original manga had multiple issues which were combined into one big book years later). So now I'll be able to see the roots of Ghost in the Shell. I'm stoked! :D It's like a ritual thing now, to hit up ebay to see what new gits items are being sold :D I just got the LE of SSS and the SE of the first movie and decided to send off the standard editions (which I had all along) to Booticon - a good friend on gamespot who dug the idea. Hope ya enjoy em man!

Speaking of Ebay, I've used it to beef up my anime library! Recently I've purchased the boxsets for Ergo Proxy, Elfen Lied and Ah My Goddess (first season) and can't wait for those to arrive either. Bahh can't get enuff :D