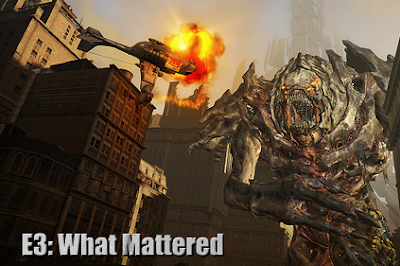 Hey guys, as most of you know E3 is hot on everyone's minds as it brings lots of new and exciting info. I am no exception and enjoyed a number of announcements as well as had fun checking out the new updates on games I've been waiting for. Also, like everyone else - I was looking for certain things and have my preferences as to what exactly matters to me. That said, it should explain that I own neither a 360 nor a Wii and thus Sony's showing meant more to me any either MS's or Nint's conferences which boils down to most of the "important" news (from my point of view) dealing mainly with PS3 stuff. That said, I do have some thoughts on some of the "other guy's" stuff and will try to slip that in. So enjoy.

Probably the biggest thing to get me excited is the new stuff shows for Resistance2! Insomniac came to the show with their 'A' game and showed off some truly remarkable bits of the game. From the fight with a 300ft tall "leviathan" in a torn down Chicago tower, to the frantically fast "avoid getting torn apart" rush in an ally on it's (Chicago) streets... it just all looks spectacularly intense, fun and a treat visually. Check out the video.

Another big announcement, while a bit short on info and content, it's more or less a teaser trailer but it's just enough to get one excited. That of course is God of War 3! Kratos is returning (roughly) march 2009 for his third game (unless you count the PSP title) on Sony's consoles and I've got a grin on my face. Check out the trailer here.

MAG is a surprise this year. No word about it what so ever till E3 and it looks really really ambitious. If I'm correct it's simply titled "Massive Action Game" and it's being developed by Zippper Interactive (Socom) for the PS3 and it boasting to include 256 players online in this crazy awesome looking shooter.

Killzone, while not introducing a lot of new info or features more or less continued to impress as they showed off some more gameplay and what not. Game looks gorgeous, nuff said.

Little Big Planet has me more excited that EVER! At first I had little to no interest in the game, didn't get it much at all, didn't see the appeal. But slowly and surely it's opened my eyes and now I'm excited! It's totally unique and opens up into a world of impossible combinations.

Other games worth mentioning include Ghostbusters, which has another gameplay showing at the show and couldn't look any better! I'm so exciting for this game which comes this fall. The newest Tomb Raider made an appearance at the show as well and Eidos has finially confirmed a release date for this fall (forget the exact date), something I'll be looking forward to. Street fighter 4 still looks sweet as hell and if I'm not mistaken it comes out this fall too (woo, this fall is going to break my wallet). Eternal Sonata, an older (once 360 only) RPG was on my radar for some time and when the PS3 version was announced I was happy, but then it was a "Japan Only release" and then I was sad :( :P But it's finally come this way this fall as well. Motorstorm had a showing. Infamous is a title I've heard of before but never gave it much attention, which may be a mistake on my part because of what I've seen it's looking really nice, something I may have to look out for. Lastly, def not least, is a little love for the PSP! In the form of a resistance title for the system! Dubed "Resistance Retribution" it takes place in between the first and second games (from the PS3).

Getting away from the games a bit Sony has come forth and slapped down a video service for the PS3 (which is already live I hear) where you can rent and even purchase videos (in digital form). With prices ranging from $3-4 for a normal rental $6-7 for a HD rental and $15 for a purchase, I can see it really taking off.

Something else (that will save you a few bucks) is the introduction of the "Greatest Hits" section for PS3 games, meaning you'll be able to get games that have sold enough to meet the criteria for a discounted price of $29.99. They've got a pretty good starting list of games including motorstorm, assassin's creed, resistance and others (full list here).

Last is a rumor or something to look out for. As it is, recently Sony introduced (with firmware 2.40) not only the abilty to access the XMB (the menu) ingame but also achivement like "Trophies" which are more or less like XBL's achivements system but instead of a gamerscore, you get a nice card with lists of your trophies (gold, silver, brownse etc). Anyway in an interview or w/e for a BUZZ game for the PSP, develper said a trophie may be rewarded for doing well and when asked (by gamespot) if the PSP would also get trophie support like the PS3, the dev said to check back with them in the future.

Ahh, that be in for Sony :P or atleast that's what I cared about. If you've heard something I might find interesting and forgot to mention please let me know.

Nintendo is still at their strategy of making fun for everyone and while most of it might not interest me, I applaud them for taking of in a new direction. But really, the only game that caught my eye was "Deadly Creatures" a (somewhat realistic looking) game where you play a spider and a scorpion who traverse the backyard desert, fight snakes and eventually have to square off again the big bad humans. Interesting ideal and I'm glad someone is trying to make something look real instead of cartoony on the Wii.

Microsoft's biggest announcement by far is the Square Enix partnership to bring Final Fantasy XIII to the 360 as well as the PS3 instead of it being PS3 exclusive. That aside, not a HUGE amount of stuff that had me excited. See I could care less about gears2 and that seemed to be their big point of interest. Fable2 looks good, would want to play that. Most of the multiplatform games I didn't bother much with as I could get them with my PS3. A bit ticked that Rockband 2 is heading to the 360 before the PS3! I smell a dirty deal there! :P But I'm still stoked for RB2 when it does hit Sonys black box.
at 7/19/2008 06:38:00 pm
Labels: Games
Newer Post Older Post Home