In this Blog
|Best CE ever!| - Resistance2 offers up the goods!
|Obama| - A quick blurb about the events
|Now Playing| - What I'm playing, Thoughts
|Future Games| - Games coming, anticipating etc
|Last Note| - finishing comments, bits.
|Best CE ever!|
To start things off, I'm going to let it be known just how very impressed I am with Resistance2's Collector Edition's package. The box it comes in is a good size and housed within it is; the game (with what I understand is a special limited edition cover, different from others? Have not confirmed that), a bonus Blu-Ray disc sitting in a sleeve, a hardcover artbook, an "exclusive" multiplayer skin and an intense chimera figure complete with it's own weapon! 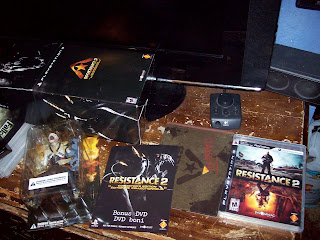 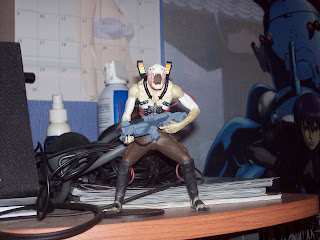 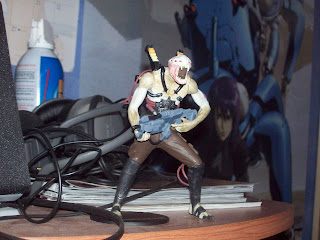 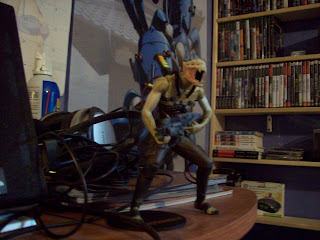 I think I dig the figure the most. I generally don't go for the "CE" or "LE" editions of games unless I'm really anticipating a game and know that goods included are well worth the extra dough. Thus far, I've got only the MGS4 and R2 CE/LE bundles. Thinking Killzone2 (depending on goods included) might be my next, with Street Fighter 4 being another contender. Makes me wonder tho, when did the CE/LEs get so big? It seems like it use to be a rare thing and now it's as if you don't provide a special edition in addition to a standard version then there's something wrong. Eh? Ha.

|Obama|
So, weird thing. We here in Canada just finished an election for a new prime minister (kinda pointless as the numbers were almost exactly the same as last time) and yet I cared much more for the American election with Obama and McCain going head to head. After work I went on the net with CNN playing in the background - till I got bored with CNN's rambling and switched it over to watch some oldskool "Home Improvement". When that was over I switched back to CNN to see a big ol "News Flash - Obama Wins" kinda stuff going on. Kinda made me smile as I was sort of rooting for the dude. So the states have their first black president and we'll have to see what he's made of when he finially takes office in January, good for him.

|Now Playing|
Ahh, with an internet connection that hasn't been working and all the new games I seem to be collecting - I seem to be doing nothing but playing :D. Fallout 3 is stealing the most time from me as it is INSANELY ADDICTIVE. With Oblivion and now Fallout3 - Bethesda seems to becoming one of my fav devs. I spent a good few hours the other day freeing slaves from "Paradise Falls", eventually got sick of the sneaking around required to do such a task and instead took out the entire encampment of slavers (they "own" the slaves) and took great pleasure in doing so. The game is massive and I just can't describe the fun and escapism I get from playing it.

You'd think with so much time and effort being put into that - that I would be fulfilled and not need anything else eh? Well, as it stands I'm still going through MotorStorm Pacific Rift, which is thankfully MUCH better than my first impressions (after my first session with the splitscreen multiplayer). The tracks are pretty massive in scale and diversity, fitting into one of four elemental categories (fire, water, air, earth) they're all fresh and challenging. I have noticed that the crashes are a bit toned back - where as in the first game they were a main part, this time around they're a bit shorter and with less emphasis. The game does have an awesome photo mode tho! At anytime you hit pause, go into photo mode and move in any where you want to snap a great shot which you can export to the PS3 HD- I've currently got a nice shot as my PS3 wallpaper (look below). There's a decent track list for music but the fact that it includes support for custom music is even better :D I've loaded a few hundred MP3's onto my HD just for it! Loads of fun for some time to come I must say. 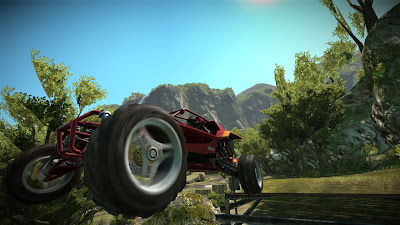 We can't forget one of the most charming games I've played... just about ever. LittleBigPlanet is in a league all it's own. I still haven't touched the create mode as I'm still going through the story and loving it to death. My cousin was over to play some new stuff and we spent like 3 hours on LBP, haha. Challenging at times but no matter how much we failed it was so fun to just keep going. The car races were a highlight - made me laugh like a retard. lol. My little sackboy - who's pretty much "Samuel L Jackson" ala Pulp Fiction with a frying pan in his hand has got to be my fav character in a game in a long time lol. I honestly can't wait to get it online and see the insane crap people are making for it :D

As I'm writing this, I haven't touched Resistance 2 but plan to after I post the blog.

|Future Games|
While there's a good number of games I've got and currently enjoying. There's always others which are just going to get left for another date - simply because I'm too busy with others atm or don't want to slap down the insane amount of cash needed for all of them. From what's out now, someday I plan on picking up (maybe when they're cheaper?) GRID, Brothers in Arms: Hells Highway, Tomb Raider Underworld, Dead Space and Eternal Sonata - if not more that I'm forgetting. But there also other titles coming along that I can't wait for. Mirror's Edge comes on the 11th (of Nov) but I think I'll just leave it for a Christmas present - which will give me some time to complete other games. My bro plans on getting Silent Hill: Homecoming for Xmas which is great as I'll get to play it without buying it! :D Killzone2 and Street Fighter 4 both come in February 2009, with inFAMOUS hitting "sometime" 2009 along side the Ghostbusters game and Batman: Arkham Asylum. While titles like FFXIIIvs and Beyond Good and Evil 2 are up in the air as to when they're coming. Team ICO's next project is still staying quiet but I bet that will be another I'll be looking forward to as well. SO! The future is good for gaming. 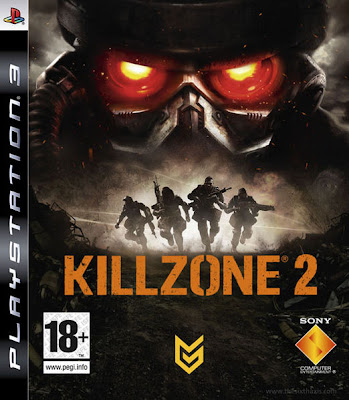 |Last Note|
Killzone 2's boxart has been revealed... and it's sweet!
Street fighter 4 is coming February 20, 2009!!!
Just over a month till the Dark Knight hits DVD/Blu-Ray
Still no "rename" for my blog, still trying to come up with something.
Saw "National Lampoon's HOMO ERECTUS" the other day... pretty much crap. A few things made me laugh (mostly the old guy) but it was lame for the most part. 2/10 :P
Speaking of Christmas, I SO want this, it's out now Batman FTW!:D. 108.

Have the last episode of "Birds of Prey" to finish and sadly that will be it for BoP. A "out of nowhere" title for me I rather enjoyed it and have become a fan of Ashley Scott because of it. The acting is spotty, the action weak but is totally worth checking out.
at 11/05/2008 12:15:00 pm
Labels: Games
Newer Post Older Post Home