Ahh, it's that time of year again. The Post Christmas season where I feel like spending some moola on myself - normally in the world of games. A few years ago (3 now?) I went out and got my PSP and it was April - 2 years ago that I went out and got my PS3, this year, it's Nintendo's turn at the wheel. I went into town, shopped around and eventually got myself a shiny new Black DSLite at Walmart and a few games at Ebgames. 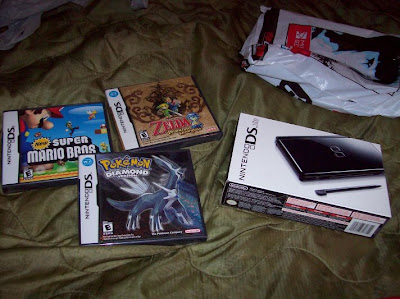 The system itself, is a bit small for my hands - though from previous use - I knew it would be. But all in all I'm happy with the machine and hope to spend some good time with the three games I decided to purchase. Anyone with suggestions for future purchases? I'm eager to get Chrono Trigger for it... but didn't want to pay the $50 they wanted for it currently. Also couldn't find "The world ends with you" at any store... which was disappointing as I was really interested in the title.

In other news - I just read an article where a 6year old decided to drive himself to school, after missing the bus. He made it most of the way before crashing the family vehicle and when questioned by police about what he was doing, he explained that he didn't want to miss breakfast or PE class and NEEDED to get to school. When asked where he learned to drive he said it was thanks to Monster Truck Jam and Grand Theft Auto games he played. Link.
at 1/07/2009 12:24:00 pm
Labels: Games
Newer Post Older Post Home