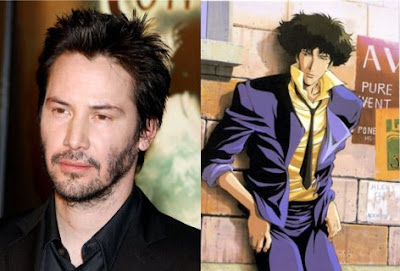 Ok, so this blog post comes from my choosing to read up on an actor I seem to like more and more these days; Keanu Reeves. To cut the story short, I was reading through his wiki page and noticed something dealing with "Cowboy Bebop" - very curious I read on and as it states: Keanu Reeves has been confirmed as playing the role of Spike Spiegel. It has also been confirmed through Variety in a January 15, 2009 article, that the production company, Sunrise, Inc., will be "closely involved with the development of the English language project"

That's the sound of my Jaw hitting the floor. :D My heart began to beat like crazy and pepsi oozed from my eye balls! ... erm ok, so that didn't happen, but it got me really excited! First off, a live action Cowboy Bebop sounds incredibly enticing and to have Reeves play Spike really finishes the deal for me.

Personally I find Reeves to be hit and miss with some of his performances. Some times I feel he does great jobs, other times it feels like he's a manikin who can't show emotion... but for the most part I really really dig a lot of the movies he does. Maybe it's the content in the movies I like more than his acting? I don't know. Either way I'm excited of the prospect of a live action Cowboy Bebop, it's set to hit in 2011, who's with me!?

Speaking of Reeves and anime... I watch a movie last night titled "Johnny Mnemonic" staring, you guessed it! Keanu Reeves! Ha. Anyways, it's about a futuristic world where some people can carry data in their heads with implants and such, the rest I'll just not get into, but that's the setting you need to know. Anyways, through out the movie it turns out a woman had her consciousness digitized and placed in these files that Keanu's character is supposed to transport (inside of his head) to a location half way around the world. It touches on a lot of ideas and subjects that makes the base for what Ghost in the Shell is. 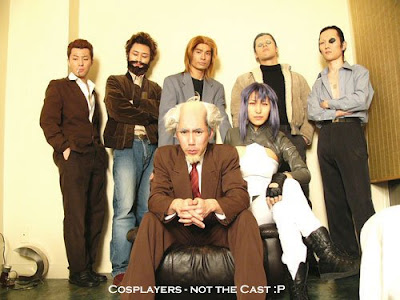 (Kind of a long segway huh?) Which makes me think back to the long awaited and very slim on news, making of a Ghost in the Shell live action movie headed by Stephen Spielberg; who's apparently a fan of the anime/manga. The movie, is to be released by Dreamworks and as mentioned above, directed by Spielberg. A rumor (again news is slim) is that it will be shot entirely in stereoscopic 3D, which Spielberg is a fan of. Set for release in 2011 as well (same as Bebop) I seriously hope it pans out and is done well. Following that I will melt ;)

I have grave hope that these titles rely zero percent on the success of the upcoming DragonBall live action movie..... cuz that looks like it'll be BAD!

Do you know of any other anime to live action gigs being planned? What else would you like to see done? Akira perhaps? Some La Blue Girl? (kidding).
at 2/22/2009 05:51:00 pm
Labels: Anime, Movies
Newer Post Older Post Home