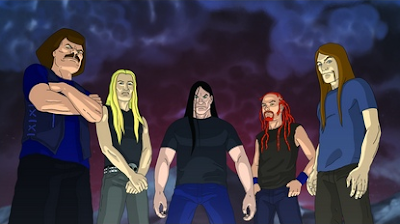 "We're here to make coffee metal. We will make everything metal! Blacker than the blackest black, times infinity!" - Nathan Explosion.

It's a weird thing really, right now I'm fascinated by a very kewl band, their songs have been the only thing playing in winamp and my ipod for days now... and yet... the members are fictional and the band... really a product of a cartoon. But I love em!

I'm of course talking about Dethklok - the retardedly popular band from Metalocalypse (an Adult Swim cartoon). I've known about the show for a while (I remember Justin highly recommending it) but I hadn't seen any of it or got into it's awesomeness. Until now! Jeff (a cousin of mine) showed me some eps; new years eve I believe it was and recently came over with the remainder of the set to view (I believe it was season 2) and we watched them all, roaring the whole time.

The whole show itself is twised, filled with jokes and great music. So afterwards I jumped online to see if I could snag myself a copy of the album released titled "DethAlbum" and did find a few copies around but decided on a torrent instead - may buy the actual CD some time in the future, but right now the MP3s suffice. To fuel the desire more, I just read about DethAlbum 2 being already in production!!! :D

Anyone with any love for Metal should check it out! The show first tho, it give you better appreciation of the music I believe.
at 2/18/2009 12:59:00 pm
Labels: Music
Newer Post Older Post Home