After spending an afternoon watching some anime & movies I decided that I'd pop in a game. However: I wasn't up for some continuation of a big story, I just wanted something to slap in for an undetermined amount of time and enjoy. Standing back looking at my games I thought "why not throw Killzone in for shits n giggles?" and so I grabbed the case, popped it into my PS3, selected the correct virtual memory card that had my save file and jumped into an already started campaign; wanting to kill some foolish helghast. To my surprise the game still looks stellar!

It's a PS2 game and you wouldn't know it! Sure it's resolution is nothing but 480i and it's textures a bid muddied when compared to what we're use to this generation but just to sit and look at it... is something to behold. Honestly, if it had a resolution upgrade and a fresh coat of texture work you'd be hard pressed to not think it a current gen game (hint hint Sony, nudge nudge). The gun models are sharp and detailed, the characters well envisioned and defined; even the environments fit the build of visually impressive. 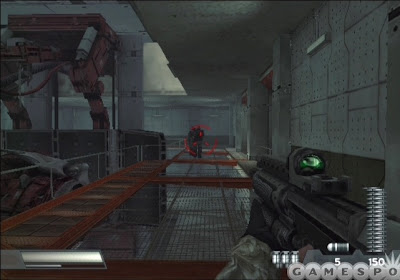 It's visual prowess does effect the frame rate at times but over all - I'm pleasantly pleased to see that even after nearly 5 years this game still looks great. Coming from the same team; it's no wonder that Killzone2 is looking so visually impressive. It seems the group at Guerilla games are rather talented. Perhaps next I should go back and play some Killzone: Liberation to see how that fares, hmm?

It gets me pumped to play Killzone2 once it drops on the 27th. Sadly I won't be getting a taste of it with the demo (that's suppose to hit PSN this week). I believe I can wait for the full fledged experience. The reviews are coming in quite a bit lately and they're just about (if not) all positive. So I'm excited :) *Fingers crossed I get hooked up with broadband soon so I can jump into some of the game's multiplayer functions too.
at 2/02/2009 09:04:00 pm
Labels: Games
Newer Post Older Post Home