Sony recently hit a milestone with their first hand held gaming system, the PSP, when they announced the sale of 50 million PSPs worldwide since it's launch in 2005. That's a big deal, as no competitor (against Nintendo's series of hand helds) has ever reached such numbers in the market. With word from Sony that they're going to push full force into making 2009 an amazing year for Playstation (including PSP), announcements of numerous franchises making their way to the machine and anticipation from fans - it's no wonder rumors start to fly.

One rumor that never seems to slow down is the suggestion that Sony is currently working on the successor to the PSP, naturally dubbed PSP2. As usual, Sony just waves the hand and raises the "Those are just rumors" or "No comment" flags, going about their business. But as of late it seems more and more likely that the Playstation family is about to welcome a new baby into it's Home (pun intended). 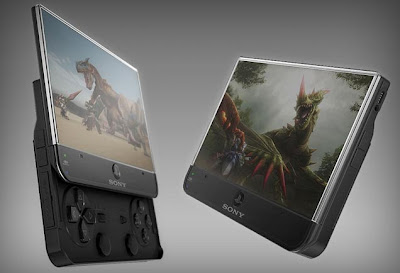 or... at least one fan's home made image of what a PSP2 might look like. Incredibly stylish, without a doubt. We'll go into detail about various rumors that makes this image a very believable picture of what we may see from Sony, possibly in the very near future.

Sony being secretive and vague:

First, straight from Sony Japan, a request for testers for "A new game machine" was placed on their website. QJ.Net is quoted on the matter:

"Well, translations of the job description vary, but the common thread here is that the people they hire will be tasked to evaluate and assess the new hardware which is to be part of the PlayStation brand"

- which leaves things open for suggestion as to what exactly they are testing... but with PSP2 rumors getting major fuel for their flames lately we can send a nod in that direction. Also noted on the page is

"Part of the job description also notes that those who get hired will "test game machines not yet released or new functionality of PS3 peripherals before they are released."

Which again can lead right into Sony's strategy of pairing their systems up for branching functionality. While the PSP initially didn't have a lot of different ways to interface with the PS3, functionality has been on the rise with the ability to stream media to and from the machines, transfer downloads, PS1 games, control PS3 games with the PSP and vice versa, unlocking extras in games when linking the two, and the list continues. With PSP2 Sony could open up a whole new can of worms in that the system could more or less function like your PS3 away from home. Boasting the ability to connect to all the services and media your PS3 can access - like Home, PSN, Video Download services and so on.

Where the sliding screen idea comes from:

Next, in a nod to the fan made sliding screen image, we've got this article from VG247 who cite a "highly-trusted source" detailing a new sliding screen feature for Sony's third update to the PSP's design. Labeled for the PSP 4000 update (see series updates) as an aesthetic overhaul... I was very skeptical. Why put so much effort into making the current PSP's image change? Which leads this blogger to believe that if said information is actually valid, it would make more sense if it was for a PSP2 model, rather than an update for the current system. The article also goes on to mention that the model would be released this year, 2009.

The most recent rumor/news bit coming from Shiny Entertainment's (founder) David Perry who opens with:

on his twitter page earlier this week. The UMD, for those not in the know is the disc format the PSP uses for it's games and something Sony tried promoting for movies too... fairly unsuccessfully. Now as the UMD is used mainly just for games, Sony has been making strides to move those games to download (as a number of titles are on PSN already) as a cheaper alternative and much more efficient distribution method; especially for a portable machine. Later, speaking with Kotaku, Perry explained his update:

"I spoke to a developer who is working on it right now," he said. "I know this developer is already working on it, so that means they have a prototype. That would sound like a fall release to me."

"I've been pounding on Sony for a long time to make the Playstation Portable relevant and not to let Apple stroll away with the portable game market," he said. "Look at what Apple is doing now. Why are so many investors investing in Apple game development? Trying to pitch a PSP game to investors right now is brutal."

Thus, if this info is to be believed - we could very soon see the system. Perry continues in the article, most of it just pure speculation mind you. He claims that Sony will initially ship games on memory sticks as a companion to the download service and eventually phase them out in favor of download only on the device. Which makes me think... not everyone will necessarily have a connection capable to handling such bandwidth intensive downloads... (which might be a smaller population... but still potential buyers).

He also goes on to say that retailers might be resistant to see such a device because they don't make a great deal on the markup of the system and make their money off of the games and resale of games... which is again another legit concern. However I believe that a simple kiosk set up within retail chains such as Gamestop or EBGames could have a system in place where you purchase a download code and input it into a kiosk (located in store) allowing you to download the game to your medium (hard drive perhaps?) right there.

Senior Editor at Gamesutra; Brandon Sheffield had less harsh words for the UMD format but agrees with Perry:

"Regardless, a PSP with a flash drive just makes sense, what with the ability to download PSone games to it, and all of that. The pitfalls are piracy, which may increase (and is already rampant), and retail anger. I think it's coming though."

He goes into further detail about how retail stores (such as GameStop) would be a little under-impressed to learn that they won't be making any money on used game sales - as download only titles... wouldn't have a physical medium to be on if Sony does decide to go digital only. 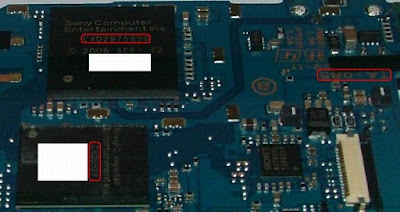 Sony leads us with more vagueness:

Which leads us into another item that popped up on the internet in the form chit-chatty contemplation, from Sony themselves. Mulling over the idea of a Hard Drive for the PSP as PSN titles make their way to the system, it shows that Sony is at least in the know that a 4gb memory card isn't going to cut it in the world of digital downloads. With their PS3 machines now shipping with 80gb and 160gb built in, many people going out and buying 250gb and 500gb drives themselves for the machine - it seems you can never have enough space. David Reeves, Head of Sony Europe, more recently confirmed that Sony is indeed looking to hard drives, quite possibly built in, as a form of storage for the hand held.

Graphics core group claims to be working with Sony:

Taken from an article on EETimes.com:

There were no names and no values ascribed to the licensing but the hint that it is materially insignificant. As a publicly held company Imagination is under pressure to disclose events of material significance via one or more of the many regulatory news services.

According to sources today's announcement by Imagination is for an upgrade to the Sony PSP2 and the SGX core is expected to be the SGX55x.

This information can be taken as a lesser point of interest, but still something worth thinking about. The company, currently is working with Apple as Apple licensed the same kind of technology in the iphone for it's graphical needs.

So as you can see there is no short pile of rumors stacking up to flame the boards across the internet these days... and these were just some to of the more concrete and believable ones I could find! Each article I picked from will be listed below for source references, so go ahead and check them out to get the full articles.

Some gamers and industry "experts" claim that touch screen functionality may make it into the next outing of the PSP. Some people scream their brains out to keep such functionality out of their system, preferring to keep the traditional style of game controlling in place... but I believe that touch screen can be something incredibly beneficial to the system and not just for games. I believe that it would make joining games, browsing the internet, pictures, ebooks and so on much easier and we can't forget that when done right; touch screen gaming is a lot of fun and a fresh way to be entertained.

I also believe that a pack in hard-drive or other similar device with multitudes of gigabytes will be a standard of the new system as Sony moves more and more to digital downloads. Being able to download movies on your PS3 through Sony's ever growing movie download service and packing them up on your PSP2 on the go sounds extremely enticing. Also, having your PS3 act as a hub for any and all other media - including games, you could jump on any wi-fi spot and download any game you forgot to slap onto your portable's drive. The technology is already in place, controlling your PS3 and transferring files with a PSP is already a feature we enjoy with the current PSP - but it can be expanded much further.

Of course I can't forget the single most important update a PSP2 would need: a second analogue nub! The exclusion of the nub's twin on the original system really threw people for a loop and caused some pretty hefty control issues with various genres of games. If nothing else, Sony needs to add that second nub.

In closing, what other features would you like in a successor to the PSP?