A few posts back I mentioned my plans for getting a 360, that being: taking a portion of my tax return and using it to purchase the machine. Sigh. I just got my info regarding my tax return for this year... and it seems a 360 wasn't in the books for the cheap-0-government when they were dulling out mine. I guess I made more money this year had much fewer tax deductions to claim and eventually wound up with about a fourth of what I've been getting in previous years. Thus the 360 is put off again, for now but... It's ok! as Jeff (a cousin of mine) offered to play the game in full on co-op with me one of these days on his 360 - so I can get the story. Mega kewl.

That said, I went and got a few things to "treat" myself with the money I did get back from the government. Two PS2 games which I missed playing till now: God of War 2 and Persona 4. I finish God of War 2 and completely LOVED it! (Scored it a 10/10 on gamespot) and have about 8 hours in Persona 4 - which is really unique and fun... tho I hate keeping track of the weather :P As well as the new Lamb of God CD Wrath - which came with a crazy kewl bonus disc with all of the songs split into vocal, guitar, bass and drums all on MP3 files.

However the most special thing I've picked up is something I've wanted for a very long time. A little item that has been (thankfully) falling lower and lower in price (from like $500 initially) to something I can both afford and not feel horribly guilty about buying. 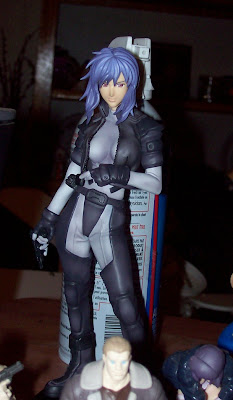 An (8.5") 1/7 scale figure of Motoko Kusanagi (Ghost in the Shell) in one of the best outfits and poses I've seen!

I absolutely love it! It joins my small collection of other figure (mostly Ghost in the Shell) on my desk/shelf. If I ever decide to spend more on figures, a much larger Tachikoma would definitely be in consideration. Here's the rest of my small figure collection (hehe, you can see random crap behind it all as my desk currently resides in our hallway/dining room as we renovate my room): 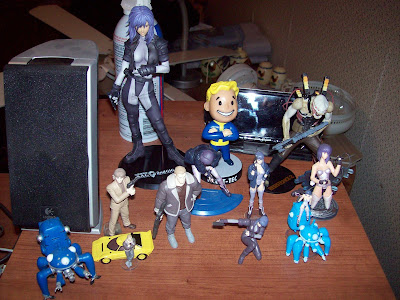 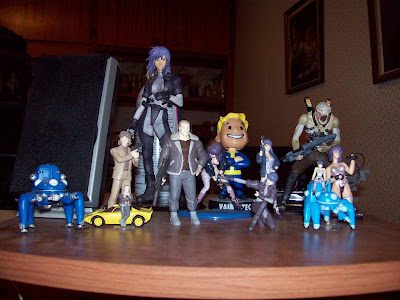