I start this blog with a bit of a heavy heart. I don't know why I let this dumb stuff get to me at times, I really don't... but every so often it irks me enough to write a blog post on it.

I'm speaking of course of fan-boy/girl-ism and the downright foolishness of it all.

Everyone here is guilty of having a favorite console, a console they play more than another or prefer controller layouts of one over the other etc etc. But fact is, consoles are really only as good as your experiences with them and thus each system has the potential to be the "best" console in any ones eyes. Not to mention, that every gamer has a different scale of what makes a game great. Some people much prefer the online interaction of something like Call of Duty where short bouts of firefights and the ranks you get from those add up to your "show off" trophy statement while others could care less about something like that, favoring multiplayer with friends at home (not online) as something they can pull out and laugh over. Others love to delve into lengthy stories and others like to a strategic route, the underlying point is that there are all kinds of differing gamers with their own tastes that aren't going to like every game on every system, regardless of your views on game-Y.

With that out of the way... I'd like to share the short form of a conversation I had with an individual the other day regarding games and ... well, narrow-mindedness. I'll start with writing that I own a PS3 and have owned one since spring 07 when the big black machine cost a pretty $699 (here in Canada) and have not once questioned spending that kind of money on the system. I've had many a great time with it and I'm rather glad I was able to pick up an original 60gb model (one of the 2 models at the time) so as take advantage of the PS2 backwards compatibility in full. Thus I stand at a point where the PS3 is prob my fav console this generation. I do also own a 360 and enjoy the games I have for that and the people I play with via it's online services. Do I hate the 360? No, far from it... but I almost feel ashamed AT TIMES to be lumped into the category of "a gamer" because of A) The conversation I'm going to discuss in just a min and B) The general vibe I get from 1 system ONLY gamers who like to crap on others to make themselves feel better (fan-boys/girls). I'm not naive or stupid, I know not every one who owns and enjoys a system falls into the category, quite the contrary as I have many a friend who love their single systems and are completely fine not spazzing at others for not owning their faved system. It's the fan-boy/girl group that seem to be growing every day, on all sides, to force gamers apart into factions at each others throats.

We'll start with that conversation. It's one I've had many a time before and it usually starts with "Hey, have you played this game?" or "Ahh man, I was playing gameX the other night!" and from there various games will be discussed and thoughts of many will be shared. Actually, I've done this many times with this one individual, but this time something new shined through that made my respect for this individual's opinion dwindle.

We start off discussing Red Dead Redemption, a game out, today I think, which I've been looking forward to and finally got around to pre-ordering just recently and from there we discussed the Saboteur and other popular games and eventually DLC and it's exclusivity between consoles (we're talking PS3 & 360). I voiced the opinion that for the most part the idea of exclusive DLC is a joke and that no matter what system it comes out for it's only a matter of time before it heads to the other system. I used the example of the GTAIV down-loadable episodes and the individual made this odd face and agreed then followed with "Why is the PS3 getting so much stuff lately?". I gave him a puzzled look and explained that I felt the two systems shared content pretty much across the board and that only those titles and features offered by either development groups owned by the big console owners or the console makers themselves were going to be truly exclusive. I gave the example of GT on Sony's side and Forza for Microsoft's side or something like Halo and Killzone for each of their respective consoles. I also claimed that because of the price drop, it's (the PS3) seen improved sales and thus a larger base for developers to sell their games to. Which lead into this individual saying that all the games should be exactly shared on each system, that there shouldn't be exclusivity, that you should choose your system on it's features (not the games/features each has) alone. He then blurted out that he shouldn't have to fork out $700 for the PS3 to play some of the games he wants to play (he gave the example of God of War3), rather they should all be ported over to his console of choice, that of course being the 360. I again gave him an odd look, quickly set down that the PS3 is $299 brand new and that he couldn't compare it's launch price to that of a 360 price of today for comparison. I then went into the silliness of cutting out exclusivity of games to a system that was built by the system manufacturer. I asked how would any company pull one customer to their system over another if every game was the exact same as the other system, to which he shrugged, and I exclaimed that business wise it's suicide. If you don't have feature X (in this case a game title) to boast over your competitor to sell your product then your product isn't going to sell.

Then, just when I thought I had heard enough silly things for the day he whips out "Well, PSN is a broken service and you get what you pay for in Live" ... and I had to pinch myself to make sure I wasn't in a forum, rather, that I was actually in real life listening to this. I shook my head and let him know that my experience and the experience of many a gamer who owned the system will agree that the PSNs quality of letting gamers play together is on par with that of Live for fluid online play. Yes Live is bit more unified as a package and the whole cross-chat over any game is a nice feature which the PSN currently lacks, but everything else is there for you to have a good time in an online match of what ever game. Granted, for ANY online game you're looking at having lag when people dip below the minimum bandwidth requirement whether you're on Live or PSN, that's just how it's going to be and I've experience that with various games on each service. He touched on Live costing money every month as something people throw at him as an argument, which I totally agreed is annoying, as it works out to less than $5 per month and really, it's not something you NEED to buy into, rather a luxury service. 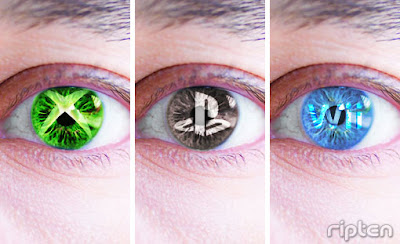 But... that's not it. No. Really, it isn't.  His comeback for my view on the online services? "There's hardly anyone to play online with PS3 because there's like less than half of the install base out there (on PS3) as compared to 360". I much of had my jaw on the floor... I swear I must have. I've heard all of this stuff on console-war like forums, but to hear it come from him just blew me the frack away. I don't remember my response, but it was quickly followed by me leaving (not rudely, I just left had to go :P). A quick look to Wiki has the Wii sitting at just over 70mill, the 360 at 40mill and the PS3 at 35mill... for end march/mid April sales figures. Which makes me question if this individual can even use wiki... of if he just believes what the forums tell him.

Now, with this example it's quite a one sided thing as it's really just me defending my fav system from insane comments that are being made up to make it's competitor look better. But I see it the other way too. Hit up any system specific forum and you'll get "haha, system X's game is bad" and "OMG this machine is garbage" in either camp. PS3 fanboys are just as dumb as 360 fanboys and PC fanboys and screw off too. The Wii seems to be the one system that doesn't seem to have a massive problem in this regard... it's curious at least.

This said, it's really only as apparent as you let it be in your life. At times I ignore this crap and just live my gaming life knowing I can enjoy just about any game I choose because I own multiple systems and don't hate on games for being on system X or system Y. Other times, like the other day I get annoyed and feel like venting, in this case, in blog form.

Gamers should unite, should use the common ground of their love for games as a base to start friendships... not hate-ships.... :D 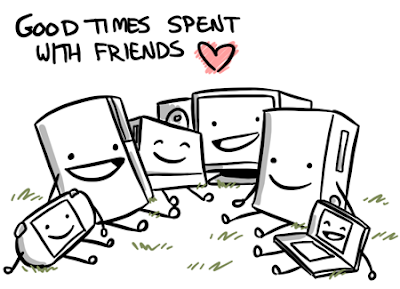