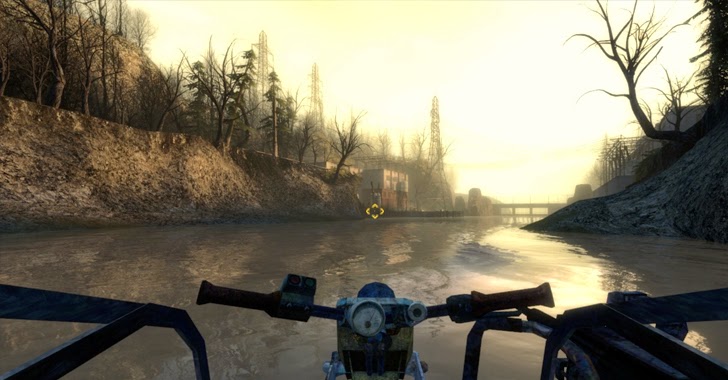 Im going to start off my blog... telling you about a game. Most, at least heard of the game in it's original roots, but I want to open your eyes to a guy who's amping this game up to 11 and then some with a very ambitious project.

The game in question: Half-Life 2 (See I told you, you would know it). Originally released for the PC in 2004 (thats 6 year ago now, wow!) and ported to the original Xbox then later to the 360 and PS3 in the form of "The Orange Box", the game is a superb example of story telling in a first person perspective and gamers wait eagerly for Episode 3 to get it's lazy butt onto store shelves and digital services alike.

A german man by the name of Juergen Vierheilig, wasn't happy just waiting for more content from Valve and created a Mod dubbed "The Cinematic Mod" to help as practice  for his skills in modeling, texturing and coding. Much time, changes and iterations later we're at version 10 and it's oh so pretty.

The mod sets out to update all of the visual elements in Half-life 2 (PC) to a standard closer to that of modern PC games. He has updated and tweaked most of the textures, re-skinned and amped up the character models for everyone in the game, added support for HDR and other nifty lighting effects that were introduced in Episode 2 into both Episode 1 and the original Half-life 2 story and has even gone as far as tweaking levels to give them more cinematic lighting schemes, amped up music during strong story bits and filled in places where valve took shortcuts.

The end result is a better looking and more involved expreince for the end user that feels closer to that of a movie expereince than the original did. It's quite amazing how much more emotion the game seems to have with these slight (or not so slight) tweaks and upgrades.

(HAD some images linked here... but got screwed around, go here)

I do have a couple knocks against it. One being the odd decisions to "SEX UP" Alyx Vance for her role. Through out the production of the mod she has gone through many changes, even to the point where breast physics have been introduced :S Thankfully the mod ships with a tool called "Character Pimper" where you can choose which Vance suits you best. I personally like the "Hybrid Alyx" which is nice mix of an updated model with the old Alyx face and a toned down "Sexiness". The other knock I have against it, which may just be because I've played the game numerous times, is that while the new character models look more realistic and great as models, they look different from the usual cast I'm used to seeing. Barney, G-Man, Dr. Cliner, Eli Vance... they all look different from their original parts... and it's just kind of disconnecting... for me at least.

The game at it's core is still the same ol Half-life2 and this new "Mod" is really just some fresh paint and tweaking to it's presentation to the audience but I feel it's quite a nice improvement to an aging looking game.  If you want this sucker for yourself head to it's official site and download the 10gb (yeah it's massive) file, it's totally free and a cinch to get runing. Just make sure you check out the system requirements as it takes quite a bit to handel all of the improvements introduced.

So... my goal up wrapping up as many game titles as I can before I purchase new games is one that seems to be harder than I first anticipated. Granted, if I played more it would be a much easier process... but I'm lazy, lmao.  For the last two weeks the only reason I touched any console is to play Perfect Dark with my sis; which btw is going very well as we're one mission away from completing Counter-Op on Perfect, have quite a bit done in Co-op and need just one mission finished to complete solo on special agent. It's quite a beefy game content wise, but I loves it, so I don't mind the hours I sink into it.

I did manage to get through a massive chunk of Resistance: Retribution (PSP), I'm about 3 missions away from finishing that sucker :) I also tried to pick up on crysis again (PC) but for some reason it's being weird and freezing when I load my game saves :( I managed to finish up all of the missions in Left4Dead (PC)... soz, that's one I can check off my list :P I'm still downloading The Witcher (PC), can't wait to sink my teeth into that, I also think about other various games I should finish soon. Hopefully next blog, I'll be able to list a few more :P

I did however grab a few new-ish games. Whilst grabbing some new DVDs and Blu-Rays from Amazon I just so happened to stumble on the GotY edition of Gears (of war) 2 for just $20... brand new... so I got it :P That should arrive early this coming week.  I also couldn't help but take steam up on their offer for a $7.00 copy of Bully and another $7.50 bundle of GTA 1, 2, 3, VC & SA - a sucker for a bargain I am. I won't count the GTA titles towards my list of unfinished games, as I've completed them in the past a few times and just plan on playing around with them... and at $7.50 for the 5 titles, it was too good to pass up.  As for buying NEW games though... I'm proud to say that I've resisted buying any :) ha. :P