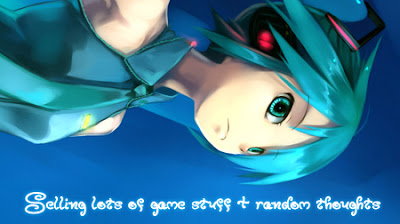 I like to buy up tons of games that more or less clutter my space and eventually I get up the courage to sell a big lot of them. Of course I play each and every one to the best of my ability, before handing it off, but it's still a hassle to see games lying around, knowing I was probably done with them long ago.

Anyways, Steam (Valve's PC/Mac direct download service) is have a MASSIVE sale for the summer with games from 25% to 90% off all over the place (hundreds of games). I of course went in to see what the deals were. I managed to resist some marked down games which I felt weren't marked down enough to justify a superb deal (I almost got Alpha Protocol for $33 but decided against it) but I also got a bunch of good deals too. Games at $1.96 and $3.84 are awesome!

That aside, it got me thinking about various games I have kicking around that I don't play anymore and how it could be beneficial to just sell some. I went digging and this is the cut-down list:

While going through my games I offered some to my sister, whom has a slim PS2. She took:

she's also looking for a copy of Shadow of the Colossus as it's one of her fav PS2 games but I wasn't willing to give mine up. :P *Maybe when/if that Ico/SotC collection pack pans out for PS3?

Anyways, on top of that I'm also selling my GameCube system /w cables, 2 controllers etc and my original Xbox /w cables, 2 controllers etc. Soz, I'm clearing out some space! :D I would love to sell off some of my older Rockband 1 instruments in anticipation of RB3... but just can't bring myself to do it right now. I've even entertained the thought of selling my DSlite... as it NEVER gets used anymore. Pokemon G/S was the last title I was excited for and there really isn't much besides that. But I dunno, I still wanna hang onto it, at least for now.