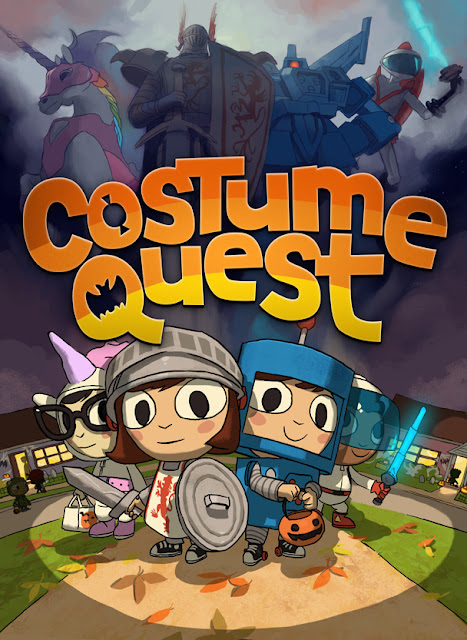 I thought about doing a review... but then decided against it. Instead, I'm just going to write up this blog and explain to you how awesome costume quest is... it'll be review-ish, but w/e.

I noticed Costume Quest for two reasons, the first being the art style which really stands out above most other downloadble games as it seems to replicate a style not unlike a proper cartoon series. The second reason is the name Double Fine which I know to be Tim Shafer's studio and thus the man/team behind titles like Brutal Legend and Psychonauts... which means the title in question is at least worth a look. 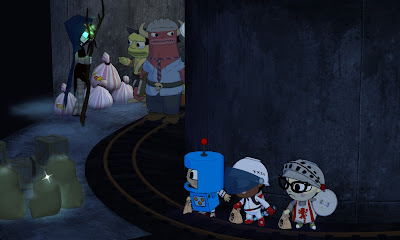 Come launch day I go and download the demo for the game, hoping to find something I like. Roughly 15 minutes into the demo and I'm hooked, then a few quick button presses later and bam, I own the full copy and dive right into the story. The story itself revolves around 2 characters, Wren and Reynold whom are identical twins that have moved to a new town and set out to do some trick or treating. You get to choose which of the characters you want to play and before long, your sibling ends up getting kidnapped by monsters who think he/she's candy.

Your quest is to save your sibling from the monsters. This is achieved by completing various tasks given to you by NPC characters around the world as well as defeating monsters in turn based RPG style battles. The RPG system sounds a little odd at first but it really does work. It's light in that you have one attack button per characters and then one super move built up after a few turns. Your attacks, as well as defense rely on quick time button presses in a few different flavors, so the game always has you paying attention. As you progress the story you collect parts for costumes which you wear in the actual word - some of which have unique abilities, such as the quick roller skate glide with your robot costume or the shield protection with the knight costume - but also transform into amazingly awesome suits for battle when you transition into one of those RPG style battle scenes. 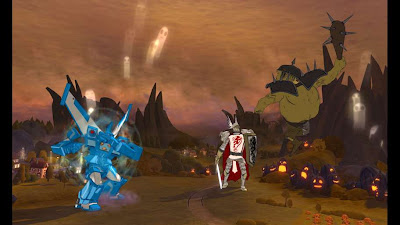 You gather a number of costumes and even a few friends along the way to aid you in your quest. Each of which is unique and really add to the story. The story itself is all text based - there is no voiced pieces at all through out the entire game. Jutting at first, you quickly learn that voice over is really not needed, as the script of the game is strong enough to hold up and make you laugh all on it's own. I did however, enjoy the hell out of the music that's in the game. Not once did it get old, or tiring or boring. There was always the right amount of enthusiasm in the score which you grow fond of as the game progresses.

Like I mentioned before, the art-style is superb and really above and beyond what most games try for. It's a simple cell-shading... but not once while playing did I see any noticeable imperfections or weird technical issues that take you out of the illusion that this is a cartoon.

The only thing that I found to pick on was A) an occasional FPS slow down at parts which helped break the illusion just as bit and B) your character (or ones following him/her) can get caught on things in the environment which takes some screwing with the joysticks to get loose. Other than those small technical issues... the game is near perfect in my eyes. I thoroughly enjoyed it and can't wait for more. Seeing as an expansion is being prepped as I write this... I guess I won't be waiting long.
at 12/16/2010 10:14:00 am
Labels: Art, Games, Reviews
Newer Post Older Post Home