Muahahaha, My PC is back in full function working order!!!! :D So blogging you will get... it is Tuesday after all :P


Which leads me to my first question! Whom of you would be game if I did a blog post every so often... that wasn't on the Tuesday schedule? I still plan on leaving the blogging to Tuesdays... but feel that smaller blogs may make their way in between the week span from Tue-Tue. Stuff like movie reviews, thoughts on games, demos etc that usually get pushed into a bit ol "Catch up" post would then become smaller posts through out the week. Is that kewl? Or should I stick to 1 a week? Let your voice be heard.


Now, as to the topic of this blog; I was torn between 3 different ideas... all of which are about half written... so I had to decide on one and this week, it's something fun rather than informative.


Just recently I've been re-organizing everything to better fit stuff around in my room. I took all my books out and put them on a 'family shelf' in the hallway and have moved all my PS3 games over to their own shelf while the rest of my games share space with my movie shelf.

First off, the Movie shelf; it's where I keep most of my games. Shown here, you can see some SNES cartridges beside some N64 ones, my (working) PSP, DSL and Blu-Rays. Below that my PS2, GC, XB and 360 games propped up by some PS1 games followed by my PSP discs. Down below, aside from figures and box sets, rest my PC games (the boxed ones, most of my games are either digital or in a big CD binder) and my PSP game cases. 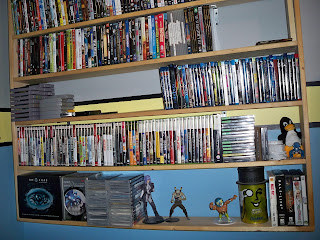 I've included a shot of the entire shelf just to show it's awesomeness - I built it myself :P. 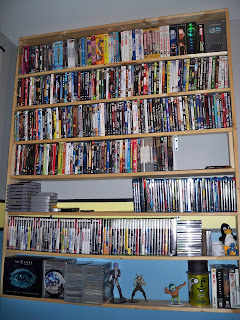 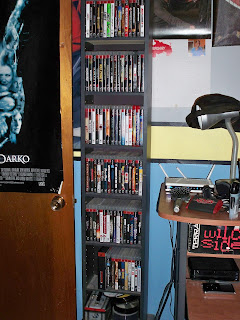 Then, my PC desk, with various crap around - it's actually quite clean as I organized it along with my other stuff. 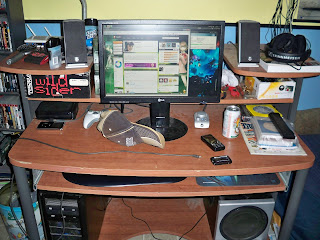 Turn 90 degrees and you've got my main entertainment hub with my game systems (N64, SNES, PS3, 360) along with TV, Receiver and a variety of controllers and clutter. 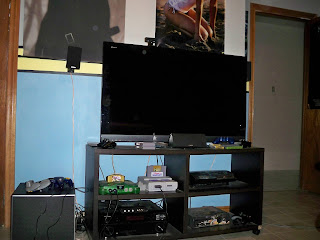 Opposite that, I've got an ottoman, that's sometimes used as a chair, but inside... all my my random gaming gear, controllers, wires and such. 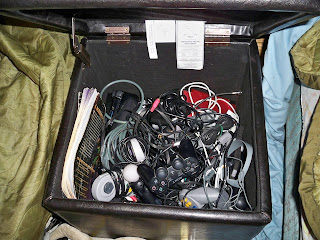 Next, I'd like to showcase some of the kewler parts of thine gaming abode. First off, my kick ass StarCraft2 mouse pad - which I love. Next, my two current systems PS3 and 360 both with custom vinyl skins to give them a unique flare (Batman for PS3, Ghostbusters for 360). 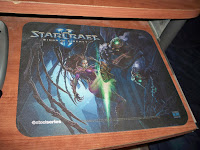 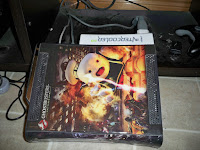 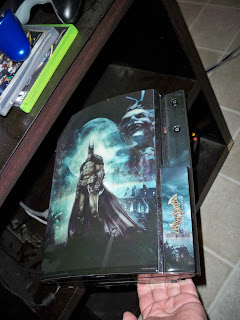 Lastly, some of the nice posters I've collected over the years. All of which, I've just noticed are made of cloth material. We've got Cloud and Ms Alba on one wall and three parts of the Mass Effect 2 team along with the Major and Tachikomas of Ghost in the Shell on another. 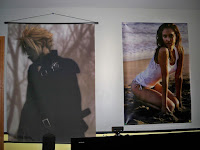 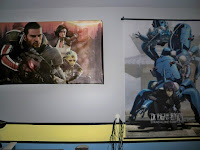