Hey guys/girls, I almost didn't do a blog today *GASP! But I've been trying really hard to make sure I've got a blog for every Tuesday and dammit, I'm going to stick to it. Nothing terribly special today, just some thoughts from my head, some of what's going and the like.

First thing I'm throwing out: Dragon Age 2 is out today (I think it's today) and so a few days ago I threw in my copy of Dragon Age: Origins for the PS3 and decided to finish off the story for my character Kaitu. It took a little messing around to remember what exactly I was doing and where in the story I was, but once I did, I fell in love with it all over.

Here is a shot of my character as shown on social.bioware.com - tho it's slightly outdated... as I know I achieved level 20 last night. 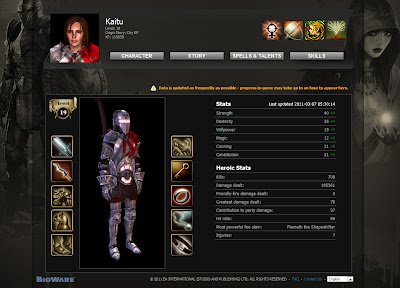 I have to say, the best part of the game is interacting with the people in your party. Leliana was always my love interest and I try to keep her happy, but the whole damn party loves my ass now (figuratively... ) It's interesting as hell the back stories and problems that Bioware has woven into these characters! It's a blast to sit back and talk with them, learning these things, as it brings the game to a whole new light. I felt for Zevran when he told me of his last mission with the Crows before heading to Ferelden and I laughed when Oghren got me totally drunk and we both passed out in the camp :P Shale is such a deep character too and strange that she was actually DLC and so not everyone got to experience her uniqueness.

Anyways, I was near done with the game when I stopped playing it. I just needed to finish the landsmeet (which I did last night) and then go to war... I presume. I didn't actually look it up, as to avoid spoilers. I did however get a result to the landmeet when I wasn't thrilled with... so I might go back and see what I can do about that with a previous save.

Anyways. Superb f'n game, can't get enuff. I also can't wait for my copy of DA2 to arrive by mail (amazon) so I can dig into that as well :)

Anyways, I'm sure there's more random stuff to note, but I'm hungry and in need of some lunch :P