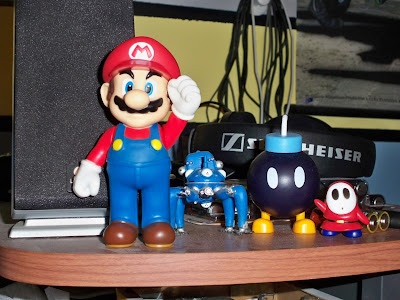 Give it up for the most Bad-Ass Plumber around!
Hey guys/girls, what's happ'n? I know... I know... it's Wednesday... so I totally missed my whole Tuesday blog schedule. Eh, what can I say? I tried, I really did Try... but yesterday was a day of complete laziness where I didn't even want to play video games... I just instead, watched some movies and TV shows that I had downloaded. Well... that made up my evening at least. I spent a good portion of the day shopping - initially for my brother's birthday (which is tomorrow, the 31st of March) but as always, I've picked up some things for myself :P
Pimpin Mario there (in above Pic) is one of the items I came across and decided I MUST have. :P Both his arms move and I think he is bitch'n awesome (damn, I'm going to need to edit this for gamespot). I also nabbed a copy of Scott Pilgrim on Blu-Ray as it's a bitch'n movie ;) Mod Nation Racers for $20 was too good to pass up and did you know Cadbury Creme Eggs come in mini size now? :D
I got a few things for my bro, but one of the kewler things I happened on is a 1:24 diecast model of the 2005 version of the Ford GT - which just so happens to be his fav car in just about any racing game (not so much the year, just the car in general)- especially Gran Turismo. 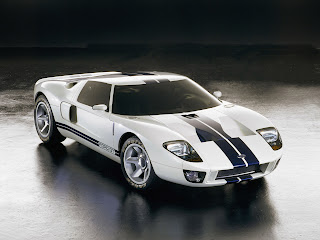 I couldn't find a pic of the model online and I had already put my camera away, so here's a pic of the actual car the model was made for. It's quite a nice car.
---00---
Have you heard of Nintendo's 'Club Nintendo' reward program? I've recently stumbled on it and found out that a good pile of my gear and games qualify for the service. It's a service set up to allow you to register consoles and games with them in return for Coins which are used to get exclusive items directly from them. Registering my newly acquired Wii and some games managed to nab some 560 points from the service and now I'm looking through their catalog for something I can trade my points in for. Thus far the Messenger bag is looking really nice. The Zelda posters seem pretty kewl... but 350 coins for some small posters? C'mon. 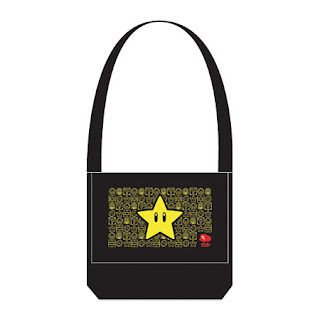 To reach an 'Elite' status within the service you need gather 600 coins for the year (goes from July1 - June 31st) and that category always gets a special gift at the end of that give year for... I assume spending so much dough on Nintendo. Some example of 'Elite' or 'Platinum' status rewards that they've listed from previous years are stuff like a replica Mario hat, a crazy awesome looking statuette of a gathering of Mario characters and an exclusive version of Punch Out to download from the Wii store (only way to get the particular version of the game). I'm 40 coins away and plan on making sure I get those last coins before the end of June, as I like kewl stuff :P Seeing as you get 50 for registering a Wii title and 30 for a DS title, it shouldn't be too hard. 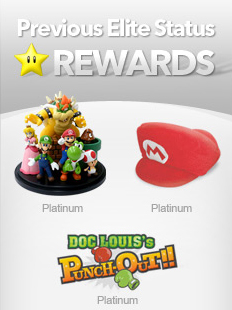