Ack! It feels like forever since I've done a real 'themed' blog post and not just something quick on the fly. Alas... it's Tuesday, I need to do something! :P I've been busy of late, both with stuff IRL and trying to spend some more time gaming. Oh! that and of course PinkSquadron :) 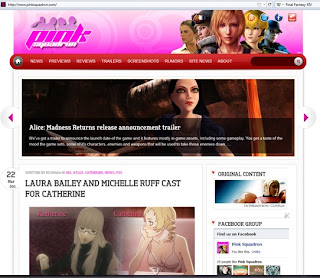 The ol blog/site dedicated to kick ass ladies of the gaming world just got a big facelift with a ton of new features and improvements. I spend quite a bit of time reporting on news, creating content for and maintaining the site and while I love doing it... it kind of eats away at time I could be gaming and doing other things. I've got a few friends working on and a few whom said they'd like to do something for the site but if you're interested I'm still willing to accept any kind of help you think you can lend. A review perhaps? An article pertaining to something around the site? (*Oooh, maybe a catchy tag line? I've still yet to nab that :P) Just lemme know. Always looking to move things further forward :)

Ahh gaming, that's the next thing I'll touch on. I've been purposely been forcing myself to game as of late. I love gaming and really get into games once I do start playing, but there are times where I just end up spending hours on youtube, or working on blogs, or other distractions that put gaming to the side.


Right now I'm playing Dragon Age 2 - which... I dig... but I'm not hitting that "Ahh" moment... yet. I loved the first game, as each character was so incredibly interesting and traveling with them a joy. This one... while I dig the new combat system over the old one and the whole scale and graphical prowess has been upped... I've yet to feel that connection to the characters. The 'Sister' character is the one whom I have any real connection to yet (family, yo! :P) and even then... it's not half of what I felt for the characters of Dragon Age: Origins. Ehh, I hope it improves. A friend of mine mentioned beating the game in about 24 hours... which is another 'uncool' piece of news... as I've got over 50 in DAO.

I've also got back into Fable 2 for a bit - played it for over 9 hours straight on a day off. Something I haven't done in a long time. The game is okay. I wasn't a fan of the first game and beat it in no time flat. This time around I was poking about trying to do some side stuff hoping to prolong the story in this title. Then I found the world of bigamy :P For some reason I find it funny that I have 4 separate families in villages around the world, some with kids, some with out and all totally un-aware of eachother. *EVIL FACE. Oh also... how come kids are conceived and then born in about 30 seconds? I assumed there might be some kind of waiting period. Eh, anyways :P

Need for Speed: Hot Pursuit (the 2010 remake) has got it's claws into me again too. When I first got it I played it quite a bit and really enjoy it... but I left it for a bit as I went about finishing up other titles and started it up again the other night. What a rush! It's such a pleasure to play, with great speed, superb visuals, audio and controls. Occasionally it's "Throw the controller at the TV" difficult... but that usually just means I need a break :P It's a TON of fun :)

Other than that.. I'm still occasionally plugging away at the remaining objectives in The Saboteur (game's finished, but there's left over things to nab) which I only jump into for 15-30 mins here and there as to not make it a chore.

I also started a game of Dragon Age: Legends - a facebook version of Dragon Age... which isn't that good :P I wasn't expecting much for a facebook game... but damn! EA is grabbing for money like you wouldn't believe. It starts off simple enough, you follow a point to point map, killing fools, leveling up etc... but really quickly you run out of coin and "crowns" (another form of currency) which you need to quickly produce potions (a necessity) and the only way to get enough to progress any is to put real world money into the game to purchase these things... something I am not willing to do.

I haven't touched Killzone 3 in a bit since beating it and giving it's online a go. It was a fun ride tho :) I rethought my score for the game (I initially gave it a 10) as I felt the fact that I was enjoying the game initially so much, i got caught up in it's kewlness. I re-scored it an 8.5.

Ooh, I got some new games too. Cheap games of course :) I've picked up Splinter Cell: Conviction (360) and Darksiders (PS3) and DarkSector (360), umm lets see, I also nabbed Enslaved (PS3) for and Dante's Inferno (PS3). Back a few weeks ago I got Metroid Other M (Wii) and Zelda: Twilight Princess (Wii), while paying full price for Donkey Kong Country Returns (Wii). Technically... I bought a Wii too (a number of weeks ago). I've had access to my Sis's Wii for quite a bit and even owned games for it... but she moved again, so I was Wii-less :P Now I have my own, Black of course :)  All of these titles join my list of games I need to get to :P