Hey team (you're my team now, okay? :P) what's shaking? Last week, I spent the time to announce that in fact I was of the male sex, this week... something a little less crazy.

**Before I start, anyone reading this blog post somewhere other than my website, please head to www.hush404.com to check out my new blog design, as I took a lot of time on it and love how it looks.

It's 420... you know what that means! No silly, while it is indeed seen as the day where one should indulge in copious amount of Marijuana smokeamage, for me it's got a different meaning.

Four years ago today, I went out and purchased my Playstation 3 at our local "Super Store" at a premium price of $699 +tax, (yep, for a month, Canada decided to raise the price $50 over the Canadian price of $649 (it was $599 in USA)... which... sucker as I am, I decided I wanted :P). I didn't care. I had saved up the sum and more over about a year and actually had the cash on me much sooner, but it was impossible to find the system in stores.

Anyways, I went about shopping for games first and picked up two that I had been looking at getting for quite a while, MotorStorm and Resistance: Fall of Man. With those in hand, I also picked up an extra controller and one of the memory card transfer units that were out at the time to transfer my PS2 game saves from memcards to the PS3's hard drive. Went to cash and picked out a 60gb system I also wanted (they had them behind cash in the electronics section, I assume to prevent theft) and just over $1000 dollars later, I'm off with my new PS3 in hand and a smile on my face.

I've still got my original PS3 too :) I swapped it's 60gb hdd out for a 250gb at one point and it's got a nice batman vinyl skin on it now, but it's still the same ol beast :) *I did some digging and found some old pictures I took at the time (I backup my pics all the time) I bought my system:

I then went about taking pics to mock up my PS2 for sale. I eventually got a call and sold it for $200, this is what I sold with it: 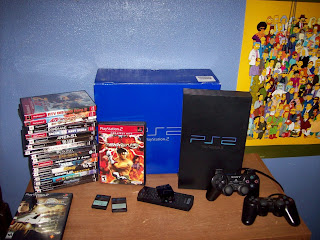 So yeah, 4 awesome years and the games are still getting better :D I can't wait for the new MotorStrom and while Resistance isn't my fav series, the new one looks like it could also be fun. Hoo-rah.