For some time now, I've been thinking of buying up an original Gameboy... mostly for nostalgia purposes; Maybe play some Pokemon or Robin Hood :) I happened to mention this idea to a co-worker or mine and she told me that her mom had one (her mom died about 2 years ago) and that she was looking to clean some stuff out anyways. It took a little while (2 months or so) and I asked her about it again, as we'd not talked about it since that day, sure enough she still had it and had actually gathered up a bunch of other stuff that belonged to her mom (whom was a kewl gamer btw) and listed it in a facebook message to see if I wanted any of it.

I got my original gameboy, as planned with some titles but also snagged an original (well cared for too) NES with controllers and games and even an N64 with the same kind of deal (controllers, games). At the awesome price of $100 for the entire lot. Some of the NES titles even came in their original cases... which kinda surprised me and really brought a kewl factor to the whole set. I took a few snaps with my phone to give ya a glance at the titles and goods: 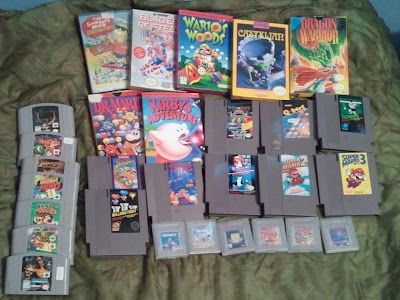 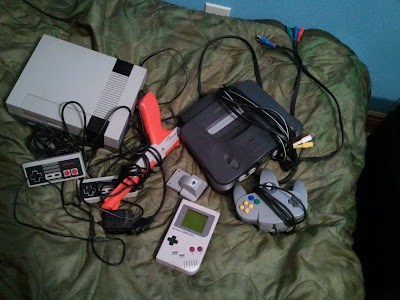 The N64 is going to my sister, as I already have one, but everything else is staying. I'm even keeping the original boxes (though, I'm throwing them in the closet instead of having them out).

I was REALLY surprised to see Dragon Warrior in the mix... and Blades of Steel can't get any more awesome :P I'm extremely satisfied with my purchase.