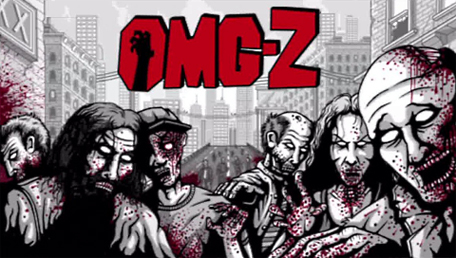 Holy crap. It's not too often that I just throw in (or click in this case) a game and am totally blown away by it. Especially when it's a cheap (technically I got this free through PS+ on PS3) download title which I just downloaded to see what it was like. But that's just what happened.

I'm starting to get burnt out on bad download titles when it comes to tiny games be they on a phone or something akin to PSP minis or XBL indie titles. There's A LOT of them out there and A LOT of them are either bad or just plain boring. OMG-Z is neither.

I sat down the other night and learned the basics needed to complete a level and learned more as I went on in this OMG-Z game... which I assume is "Oh my gawd - Zombies!" ... but it could be Onion Meat Garnish - Zebra! for all I know

Anyways, about 4 hours later, I was finished with the title (though admiditly I've gone back to try and get better metal awards)... yep, killed my through it's 80ish levels, have all the upgrades have had a hell of a time with it.

It's not a typical zombie killing game. Instead of some ammo king who runs around and slaughters everything in an arcade-y like setting, each level is just one screen (with various locations throughout the game) and you a lone shooter whom stands a-top something and has just 3 bullets to pick off the entire mess of undead (well over 100 zombies at times). You can upgrade your weapon's ammo to 6 shots through-out the game, but for the most part you'll be working with just those 3-6 shots. The strategy in play is with the different zombies, their chain reactions and how you upgrade your various skills.

Some zombies explode which take out others around them, others turn into acid pools that trap fellow zombies; police zombies fire a round before going down and the army undead fire a few bursts of ricocheting bullets when killed. Each of these types effect other types and depending on upgrades you choose (from money you receive with medals you earn in each level - Brownze, Silver, Gold and Platinum) their effects will be raised and even upgraded with new abilities as you progress. Mix in your own upgrades of ammo, weapon strength, explosive barrels, zombies with varying health and obstacles... and you've got a bit of a thinking game mixed in with your zombie shooting.

It feels truly unique and is addictive like you wouldn't believe. It's got a black/white (and grey) color scheme with only the blood and your reticule showing color, which is quite helpful, as the game gets a little chaotic at times. It's pixel art, much like games of yesteryear and even playing in on my PS3 on a 1080p HDTV(it's built for the PSPs 480x272 resolution) it looked great - very retro.

If you've got a PSP or PS3, get this game