Reason? Oh... how about this AWESOME Steelbook case! (at no extra cost!) 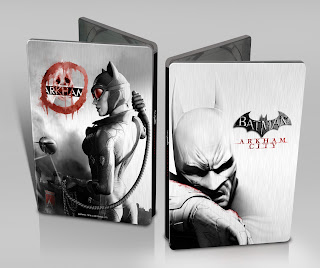 Until recently, I didn't even know this was an option! Hells yeah futureshop for scoring something kewl for us Canadians :) I was even worried about a case as I'm getting the collector's edition which as far as I can tell, comes with a cheap cardboard sleeve instead of an actual game case.

So, now the game can sit with the rest of my PS3 games :) Though... I'm going to need to find a bigger shelf or something... as I'm stacking PS3 games on each other now... as I've run out of space. *Perhaps I'll move them to my larger shelf and move my PS2/Wii/360 games to the current PS3 shelf... 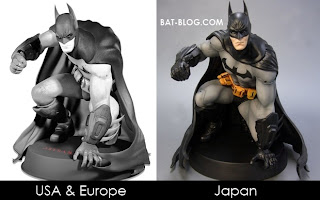 Has anyone noticed that Japan gets a colored version of the batman statue that's included with the CE of the game? What's up /w that?

I can't wait for the game :) It's got to be my most anticipated of the year (yes more than Gears3 or Skyrim), as was Arkham Asylum when it launched. Playstation Mag Aus has the only review up right now, but we should start seeing some more soon - btw, PTOM AUS gave it a 10/10. I just hope that all the DLC being released at various stores for promotion (the different batman costumes, robin costumes, challenge maps etc) all make it online before long so I can snatch those too :)

Speaking of Batman, did you know that DC has done yet another of their awesome animated movies for the Dark Knight? (Not the movie, the man himself). It's based off of Frank Miller's comic of the same name and has Bruce Timm attached (the guy behind the animated series of the 90s), with Bryan Cranston as James Gordon (a kewl thing for sure) and  Eliza Dushku as Selina Kyle/Catwoman. The whole thing sounds very kewl. If DC's previous efforts are any indication, this one should be well done :)

Here is the trailer for that: