Ahh, so last blog post was a bit of a sad one... in that I detailed the demise of my beloved PS3. It now rests inside my closet, power cord wrapped around it's corpse, in the dark. My new slim model PS3 in it's place, complete with it's newly swapped in 750gb hdd drive and (so far) clean look.

Yep, I went out and got a slim model, 160gb version... but with the management I had to do with my 250gb (on my Phat PS3), I knew I would need an upgrade. Right now, the largest drive you can get in the specs that meet the PS3's needs is 750gb. At $130, I thought it a great purchase. It (new PS3+hdd) set me back a bit, bank balance wise, but I'm just glad to have the extra space and a working machine

I also purchased something special for my new PS3 from ebay, but will detail that in a later blog.

I've got quite a bit of downloading to do, to get a lot of my games, DLC, updates etc ready to go on my new system... but I hope it's not too bad, just something I'll tackle when I'm sleeping.

I did start a new file on Arkham City, while using the stock 160gb hdd in my new PS3, planning to just upload the save to my PS+ save space and download it when I swapped in my new hdd... but I forgot to do so... and now need to start the game for a third time. I'm pro at the first 5 hours :P lol.

On the very day that my hdd drive arrived, I also received my collector's edition of Uncharted 3. I'm not exactly sure what I'm going to do with the belt buckle (have never worn em) or the Ring, but they're very kewl and are actual items, not just cheap knockoffs. The statue of Drake joins my others on my computer desk and demotes my new batman one to the shelf (mainly because it's the only one that will fit on my shelf). 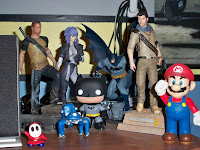 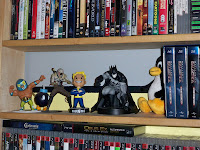 Lets see. Batman? Check, Uncharted? Check, Gears3? Check. Skyrim is coming soon and... honestly... that should be good for me for a bit (whoops, forgot the MGS HD collection :P). I'm going to try and cut spending on games again for a little while. They've been sucking the ol cash out of my bank account a lot lately, which is never fun :P I did pretty well all summer, warding off buying any games, but this fall is brutal with the amount of amazing that's been out. Eek. Perhaps I'll drop a few on a Christmas wish list and forget buying them myself? :P

Speaking of spending money, check out what I pre-ordered today: 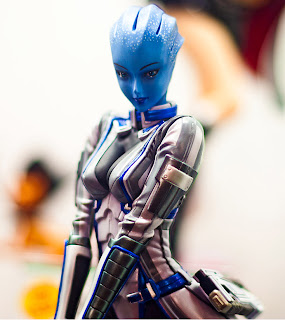 Isn't it beautiful? I find they could of been more true to her actual design, but in all it's quite the awesome looking piece. Mass Effect 3 in March :D 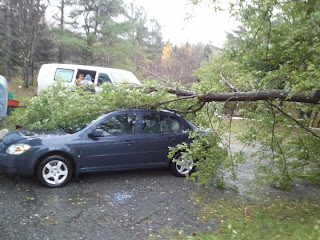 Thankfully, just some dents left as damage. The window is fine and no paint chipping as far as I can tell.

- Hydrophobia Prophecy (an update to Hydrophobia) finally came to PSN and it's free for PS+ subscribers (hells yeah)
- Started play Chrono Trigger (PS1 game on my PSP) a little while ago, loving the hell out of it :) Been AGES since I've played this title.
- Square just announced Chrono Cross, Final Fantasy 5 and 6 for PSone classics (my PSP is happy)
- Need to jump into Uncharted3. It's been sitting on my desk just a little over 24hours now... which feels wrong :P
- The Netflix app for my android phone now works in Canada (it didn't previously :S). I caught an episode of 'Til Death' while on my break at work today :D
- I love Netflix.
- Bane is apparently going to be in the new Batman movie. That's awesome.
- The Batwing and BatBike, looks stupid in the new Batman movie.
- Anne Hathaway seems like she'd make a nice Catwoman though. Deff can't be worse than Halle Berry.
- Finished Spaced, a charming show staring Simon Pegg. Going to miss it.
- Jumped into this season's 'It's Always Sunny in Philadelphia' and couldn't of laughed harder. It's such a funny show :D
- Behind in Dexter, The Office and Community! Eek, shame on me! :P
- Saw Paranormal Activity 3 the other day, Garbage.
- Been having rather vivid and interesting dreams lately.
- Halloween was rather dull this year.
- GTA V.
- I'm tired of writing, as I'm sure you're tired of reading. Peace.
at 11/03/2011 08:39:00 pm
Labels: Games, Misc
Newer Post Older Post Home