A pleasant surprise in Payday: The Heist 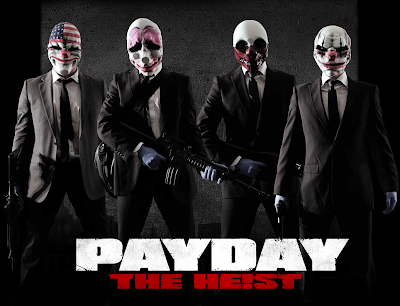 Don't you love it when you get a game, usually just on a whim, not expecting it to blow you away but rather be something of a time kill for the tiny amount of effort and money you put into obtaining it and then it turns out to be much more than you expected?

Such is the case with Payday: The Heist.

I merely got the game free via PSN as Sony offered it up if you went ahead and ordered the other 4 games in their "upcoming PSN releases" special (I forget exactly what they called it). Street Fighter 3rd Strike Online topped the list followed by the impressive looking BloodRayne title, a third in the series for DeathSpank (The Baconing) and the top down Renegade Ops. All of which I had an incline to play and didn't mind ordering them all at once to secure some bonus themes and the aforementioned Payday game.

I didn't even really know what Payday: The Heist was... but, for free I was willing to take a shot in the dark and now I'm hooked.

The game has a simple but decently executed premise. You're one of 4 masked men whom rob banks. In later levels you're doing things besides robbing banks - like ambushing prisoner transport vehicles - but it all works around the 4 player co-op, communicating with others on how best to avoid getting filled up with lead from the countless amount of law enforcement personnel coming your way.

I've sunk about 6 hours into the game before I had my PS3 die, but have jumped back in and started out with 2 hours more, ranking up as I go. With new ranks, new weapons, items and power-ups become available which really allows you to play how you want.

The game itself isn't the most jaw dropping, graphically, nor is it perfect with controls (default controls felts too loose for me, I had to tone down the sensitivity) and I felt it weird as a first person shooter (I felt a third person view might make more sense) but it's over all experience really makes up for it's rough edges. There are varied levels, each with unique tasks to complete and enemies to take on. The enemies range from regular cops to tank like Bulldozer units whom take a ton of bullets to down and the Taser units whom freeze you in your steps with their electrical attacks, among others. Civilians play a role, you must keep them in control, but they can also be used as bargaining tools with the law, which equal out their usefulness. The music kicks in when appropriate and I actually felt it a perfect mood enhancer when you're hunkered down, barely able to move and need an incentive to make a dash for it.

The other issue... I felt that the team didn't put enough personality into it's 4 masked characters. They chat back and forth and have a glimpse of a personality... but I felt that the dev team could of taken it much further and really made each of them into their own recognizable characters - something akin to Left4Dead, which it bares a similarity to anyways. It doesn't cripple the game, but it would of been easier if you could connect to the characters rather than just their masks.


To be blunt, I don't play a lot of games online. I don't enjoy randomly killing a bunch of people for hours on end in a death match like setting with the end result being some XP and bragging rights. That perhaps is why I like The Heist so much... as it's really about the experience and working together for a goal. That same kind of gameplay is why I still played L4D on the PC and why this game could be one of the few that holds my interest outside of a week (as with most online games I've played).

I am thoroughly impressed with Payday: The Heist, not because it's a near perfect high profile game, but because it's charming enough to really hold my interest despite it's shortcomings. In a world where cookie-cutter game play (especially in multiplayer) seems to reign supreme and bore me to death, Payday is a pleasant surprise.