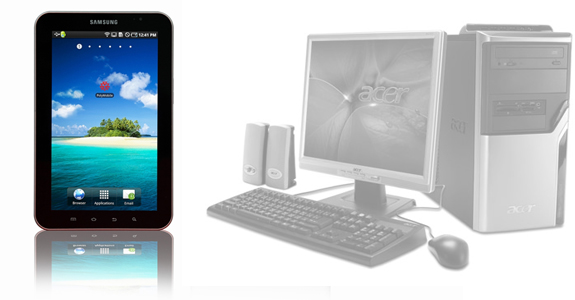 Just a thought that stems from a changing environment I see. The idea really sparked from the other evening when my brother and I were discussing a movie of which we didn't know the name. Stumped, we decided Google might know and my brother reached for his 3DS as he exclaimed "It'll take 5 minutes for my PC to turn on and boot up to a point where I can search" and that's the sad truth. If your PC isn't on... you're in for one hell of a sluggish wait compared to other electronics today.

I for one, reach for my android "smart" phone if I want to look up something quick, my brother his 3DS. Others their ipones, tablets and compatible devices that aren't anywhere near as clunky and time consuming as the PC. Sure, the PC is the more powerful hardware and at times the easiest to deal with (in regards to a normal keyboard/mouse combo, compatibility with various media forms) but... it would seem that the big ol clunky desktop PC is becoming a dinosaur of the tech world.

Netbooks had a quick run and I even read that Dell has dropped the idea altogether due to the popularity of tablets over netbooks. Netbooks were the "speedy, low-powered version of a laptop" which seemed like a good idea at first over more beefy laptops for those quick, less intense uses... but the tablets seem to be a smarter move for that kind of thing.

I love my PC for the game's it's able to run, it's multitasking swiftness (it's not always easy running a media player, browser, chat clients and download software simultaneously - if at all - on other smaller devices) and power to run dedicate stuff like Photoshop, 3D modeling and other such heavy software... but for every day tasks... it seems that people are taking the easy route and just picking up a tablet like device.

Whether you want to check facebook, browse youtube, watch a movie on netflix, surf the net, play some games, chat with others, check your banking, or download an app that makes fart sounds - tablets (and like devices) seem to be the easier way to go. The prices for these devices can some times alienate people... but tech is becoming more and more affordable each day as countries like India experiment with tablets that cost a mere $32-$60. While those "uber-tablets" now cost upwards and beyond $500, in the next few years I can see them dropping out and down to the sub $200 range easily, with cheaper models going under $100.

With the popularity of the iphone/pod/pad and the ever growing market of smartphones (and again, like devices) in general, it would seem that this kind of 'easy tech' is only going to continue to integrate itself in our lives more and more.
at 12/17/2011 02:34:00 pm
Labels: Misc
Newer Post Older Post Home