No Light without Dark 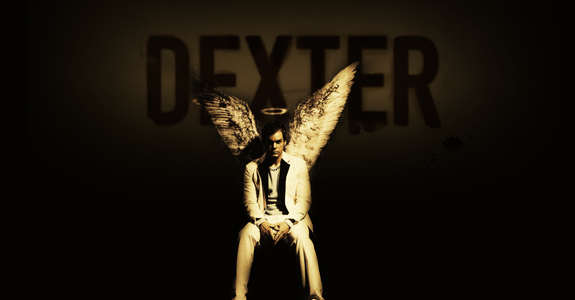 *Don't worry, no real spoilers.
While I understand that the show in question isn't everyone's 'bag of tea', I simply adore Dexter. The basic premise behind it is simple; each episode you follow Dexter Morgan, a blood splatter analyst for Miami Metro Homicide whom uses his expertise and position to track down the scum of the earth (murders and the like) and kills them. However, the weight behind his character, his background, reasons for killing those he does and his entire universe created by the (well, originally created by the author of the books, Jeff Lindsey) the team behind the show is one of supreme crafting.

As the seasons go on (the 6th just wrapped up) it seems to be less and less about the kill and more about delving deeper into what makes Dexter tick, what makes him human and the flaws he and everyone around him has. When the killing bits do interweave into the story (as they often do) it's an exciting entrapment of suspense as you wonder exactly how things will play out; constant twists come to mix you up and destroy any kind of path you assume you see forming.

I just caught the season finale of the 6th season's run and while the episode itself was a bit sporadic with it's pacing and excitement level, in the end it cleared up a lot of loose ends from the season's length and even brought to the surface some plot points which lots of people were no doubt wondering about and suspecting to rear up at some point. I won't go into detail as I hate to include spoilers and ruin it for anyone whom watches the show, but suffice to say, the events in this last episode (for the season) has mixed Dexter's world up in more way than one.


IMO, the shock of season 4's end was a much bigger thing, but the news presented and played out in this end of season will no doubt have bigger waves in how the series plays out from now on. Gladly, this season, even including Colin Hanks as Travis, was a step up from what I consider a low point for the series in last year's season. Perhaps it was the fault of the end of season 4 that season 5 couldn't stand up in comparison... but as it stands season 6 beats season 5 by a long shot.

Including Edward James Olmos (of BSG fame) to this season's cast was also a high point, for me at least, as I love seeing the guy in any role.

I yearn for more. Sadly, next season won't start airing until next September (which is a long ways off) and while I do have the first 2 Dexter books (which the show is based off of) I fear reading too far into them and then ruining some plot point they plan on using for the show... which I wouldn't want to do at all.
at 12/19/2011 12:11:00 pm
Labels: TV
Newer Post Older Post Home