Some of my all time fav movies 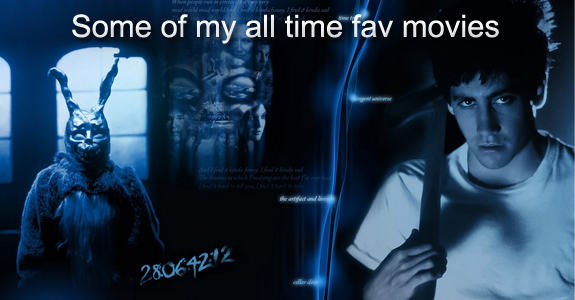 Why not mix things up and just go with a random idea? :) I always seem to go a little overboard with things, in thinking I need whip up a monster of a blog to get out some very simple idea... this Time I'll try to keep it as much to heart and simple as I possibly can.

This will be a collection of films of which I enjoy very much, can watch a number of times and still enjoy the hell out of... in no particular order and I'm sure I've forgotten some key titles.

I was asked what exactly draws me to this movie... and I can't really pin point it. The characters, the story, the mystery around most of the story, the themes? *Shrugs. I love how it ends, I love both Donnie and his friend Frank, I love how he deals with life when he is assumed, by others, to be very different and sometimes even wacky. It's music haunts me, it's underlying values make me think. It's a movie I can watch a gazallion times and still get chills from. 28:06:42:12

Maybe I've got a thing for Dinosaurs. Just putting that out there. But when I first saw the intensity that is Jurassic Park... I near shit my pants. I would of been... 7 when it came out... so that no doubt factored in how it impressed me... but to this day I can still stick that sucker into my movie player and enjoy the hell out of it. The Dino's of course steal the show but I dig some of the characters as well. It's funny seeing Sam Jackson in such a 'non-hard ass' role and over all the entire movie packs a wallop with believability and suspense. The sequels weren't even close to reaching that peak... as the first stands alone as the big picture in my eyes.

I think the world and the visuals created are what shine in Avatar and I'm fine with that. I'm a Sigourney Weaver fan, so seeing her in it was special and each and every character seemed to play their parts well... but in the end it was the amount of work put into the unique world and look that it all has that impressed me most. nI heard many a comment at the time that the story was a 'Pocahontas rip off" - but I say, 'what's wrong with that?' Pocahontas was a decent love story about two factions that were more or less at war as the two key characters saw through that to be together. How much to the core can you get than that?

Known simply as Leon in some circles. I've only recently saw this title (sometime last year) and I absolutely love it. The characters and bond they have through out the movie are stronger than steel and I loved seeing that relationship blossom. Each character seemed to bring something that added to the other and in the end they were both better because of it. It's subtle at times and I feel it's a bit slow paced, but it works perfect for the movie. One I'll deff be watching again and again. Oh also, it doesn't hurt that I'm big fans of both Portman and Reno.

I loved the first one as well, but the second one is the one I have more attachment to. Much like Jurassic Park, it's something I grew up on and thus nostalgia is there as a factor to my love for this movie, but in the end I still love to watch it because of the characters, the humor, the unique premise of it and the over all quality of the film. Too bad, not too much has come out of the series in a long time. They did that game for PS3/360 which I loved (though had some gameplay issues) and a horrible top down shooter that tried to introduce a new character set over the old ghostbusters... but it was horrible. Rumors of a third film have been in the works for ages... but Bill Murray is a stubborn fuck head, not wanting to do it and even the other 3 actors are iffy on making it about them, rather wanting to hand the torch down to a different GB team for the future. Sigh.

I love MOST Batman films (Batman&Robin was trash and Forever was okay) and Christopher Nolans take on the franchise really impressed me. Begins was superb, but TDK really took it to a whole new level. Ledgers joker did a supreme job, something I questioned as I love Hammill's Joker from the animated series (and Rocksteady based Arkham games) and the feel of the movie over all was solid. I'm pumped for The Dark Knight Rises... but have fears of it being much less a mammoth awesome movie as TDK was.

Can you believe that this movie is a product of the 70s?? I'm not trying to say that movies from the 70s are garbage, but that you don't usually see movies from that era stand up visually to movies of today. This movie looks like it could of been shot just yesterday. Their focus on real world probs instead of cheap gimmicks really paid off. It sure as hell didn't hurt that they had a core recognizable and unique alien set, thanks to Giger's brilliant mind, as well as a creepy, mood setting tone and a great premise. Each sequel has been hit and miss depending on situation (like Alien 3's horrible use of crappy CG), but Alien is my favorite.

A movie not well known to many. It's the story of a Dragon Hunter whom goes on a quest to slay every dragon until he finds the one that destroyed a boy's (the future king) future by tainting his pure heart by sharing his. He ends up befriending one of the last remaining Dragons, working with him to fool the rich in giving them money for taking him down. Eventually, he learns that the dragon he befriended is the dragon he's been searching for and he's forced to make a decision to either kill the dragon, which he believes will heal the boy of his wickedness, or let his new dragon friend live. It's a touching story and the dragon is great character. The sequel was garbage.

I've actually wanted to view the first Scarface movie as I hear it's good. But, the Scarface I know is an excellent movie on it's own. The climbing of the latter than Montanna does from dirt to king and then the sequential fall from said high place along with all of the people involved in between, the loyalty of friends, etc in the world of drugs is an incredibly interesting and thrilling one. Going back, it's a bit of a long watch, but you seem to not notice as you're watching it as you're caught up in the whole thing. Be it the bathroom scene where Tony and his budd were about to get torn up or the iconic scene where Tony makes his final scene, it's golden through and through.

ED2 simply because it's SOOO much like ED1... just with a bigger budget :P I love both of them and even the third one, but ED2 is what got me into it. It's silly, but also interesting as hell and just goes to show you what you can do with the right amount of ambition and some friends willing to back your ideas. Have been a fan of Bruce Campbell ever since. Loved Raimi's style ever since and while some of the monster effects were cheesy... it's pure gold in my books.

By far, the BEST Zombie produced movie yet. His first title, House of Thousand Corpses was alright, but leaned more on cheap grusome effects than actual good directing. It's sequel, TDR is a much better film. It's moves quicker, has much more fleshed out characters with a better story line, better music... and just over all a better scope over it's campy predecessor.  It's ending scene will always stay burned into my head as one of the greatest I've seen.

Admit it. When you think Adam Sandler... you think goofy hack, right? Did you know that he's actually got some solid talent? Every so often he does a movie where this shines through as he takes on a more serious role over that of comedy punching bag. This tale follows a man whom finds a friend of his from college wandering the streets and begins hanging out with him. Before long you learn there is something off about Sandler's character and Cheadles character attempts to help him out... all the while also trying to be the friend that sandler needs. Eventually we learn that sandler's entire family was killed in a tragic even and it's really messed him up. There's ups and downs and it's really like roller coaster as you watch it. It's superb.

The whole universe crafted by Diesel and team is one I enjoy very much, much like Avatar. Unlike Avatar, this movie doesn't rely on a lot of special effects to get it's tone across. The sequel was okay and did a lot more effects, but the focused in small project feel of Pitch Black worked better IMO. The Riddick character is one I like very much, the feel and tone of the movie is what kept me.
at 1/22/2012 03:28:00 pm
Labels: Movies
Newer Post Older Post Home