A little indecisive and the waiting game

Ask anyone whom knows me well and they'll tell you that I'm rather indecisive. Be it picking a game, movie, CD or what particular version of each of those items, or even just as something as simple as choosing what to eat at an outing... I seem to mull over things and weigh the pros/cons of each for quite a while before I purchase something.

Such is the case with Mass Effect 3. I initially pre-ordered the 360 collector's edition in November, through EBGames (their website specifically). A week or so ago, I canceled it in a move to get the PS3 CE instead. Not long afterwards I then canceled that and went back to the 360 CE version, which I again canned for just the standard version of the game. *This all took place in one afternoon/evening btw. Later I decided I wasn't happy with the normal edition and tried to get the CE 360 version ordered again. But EB Games must of sold out? They told me, "that edition isn't available any more". SO! I pre-ordered the PS3 CE along with a 360 regular version... just in case.

Not happy with spending money on two versions, I decided to look elsewhere for the 360 CE. Amazon didn't have it for sale and a few other places said it wasn't available. I finally found a place online that had it, Futureshop listed it and a bonus "Trilogy Edition Steelbook case" with it. So, I added it to my cart and went through the checkout... only to be greeted by an error code and an explanation that I did not fill out my address. I checked every thing I could and I knew this was not the case. Three or four emails later to their support page and I'm left running in circles as they tell me to delete my IE cache data (I don't use IE... but they insist this will fix the problem). Some head shaking later, I decide it's a problem with their website and I try to figure out exactly what. Turns out... because I had a '#' value somewhere in my address line, the code of the site got caught up on it... as I removed it and the site started to act normally. I did get my 360 CE version of Mass Effect 3 ordered :) It comes with this neat Steelbook that has "Mass Effect Collection" written on the side and space for 5 discs inside (ME 1, ME2 and 3 each have 2) - Not sure if I'll use it, but it's cool anyways. From there, I went back to the EBGames site and canned my PS3 CE and 360 normal edition with them :P 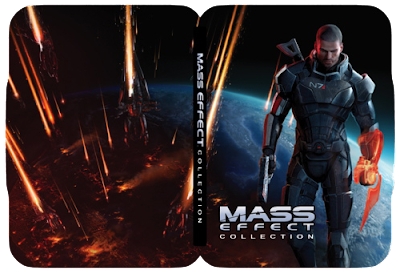 The other thing on my mind right now, which didn't take nearly as much thought as to what version to get (I feel I'll have no use for 3G and refuse to pay for the service, thus it's the Wifi model for me), is the upcoming launch of Sony's Vita handheld. I did take a look at their "First Edition" packages which came out this past Wednesday... but I didn't like that it only came with a 4GB memcard and Little Deviants (a game I had little interest in), so I opted to waiting the extra week for the official launch and getting an 8Gb card (would love the 32GB card, but $100 is too much for that) along with Uncharted: Golden Abyss.

This is... as far as I can remember, the first gaming device I've gotten at launch. I got my PS3 a few months after release as I didn't have the money at the time of launch and it was near impossible to find one locally when I did gather up the cash. Every other system I've purchased down the line of their life spans. So I'm excited to get my hands on something so fresh and new :) Sadly, I've had to cut back on spending for other games (I really wanted to pick up the Jak/Daxter Collection, Twisted Metal and a few others) to make the purchase easier on the bank balance, but I feel it'll be worth it when it arrives next week :) Kinda friggin pumped. Not gonna lie :P
at 2/18/2012 02:49:00 pm
Labels: Games
Newer Post Older Post Home