I love GoG - My GoG shelf 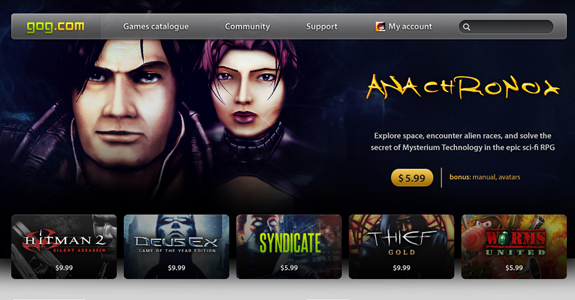 I like other digital distribution services as well, don't get me wrong, but what GoG is doing for the older classics is beyond a service to the industry. The guys and girls behind the site take their time with each and every title that goes up on the site, making sure that each game is ironed out to work perfectly out of the box (or rather after installing) without any major issues for customers to deal with. Is it an old DOS based title that won't run on modern machines? Don't worry, GoG will put it in DOSBOX (a superb Emulator) and tweak it to work best with modern OSes. I've even heard of the team doing their own patches to get games working, without incident, on machines that would other wise take a whole lot of work arounds for fans to get running (if they'd done it themselves).

Their collection of titles is growing all the time and at $5.99/$9.99 for each title, it's hard not to snag a few out of nostalgia or curiosity. As seen above, some of their most recent titles include hits like Hitman, Deus Ex, Syndicate, Theif and Worms.

As games start to move to the digital platform... I start to feel more and more nostalgic to the idea of having a shelf and stacking my games on it. Sure, consoles (for the most part) still allow you to collect and arrange physical cases for your games... but on the PC side of things it's becoming a rare thing (besides the Collector's edition of StarCraft 2, the previous physical copy game for the PC that I've purchased is like Half-Life 2 back in 2004). I really don't mind digital content as it allows me to keep my stuff with me where ever I go.. and it's quite convenient not needing a bunch of discs swapped in and out in order to play my games, but I still feel for that "Look over to my shelve and just decide to put in a classic title" kind of feeling.

Then steps in GoG (Good old Games) with their virtual Shelf :) I got word today that they threw up Anachronox for sale on the site and I jumped at the chance to buy it. I'm downloading it now and hope to jump into it soon :).

Anyways, here is my collection of classic titles on GoG. What does your GoG gaming shelf look like?