When I'm out... these are my weapons.

So, I got home late tonight to find quite a few items out of place in my room. It was quite the mess compared to what it usually looks like. Curious, I asked my brother and he explained that 2 of my little cousins had come by for a visit. "They didn't touch my Vita did they?" was the first thing that came out of my mouth; thankfully they didn't :) That may sound a little harsh... but... little kids and expensive tech just don't mix well IMO... well... these little kids at least. (Last time I let them mess with my stuff... the middle click button on my ipod classic broke :|.

Soz, anyways, I went about the task of tidying up, putting stuff away and noticed that a lot of my handheld gaming devices were strewn across the room. After collecting them up and throwing them on my bed, I remarked "Oh, I've got more of these things than I realized" so I threw down my phone and decided to take a pic of "The pile". 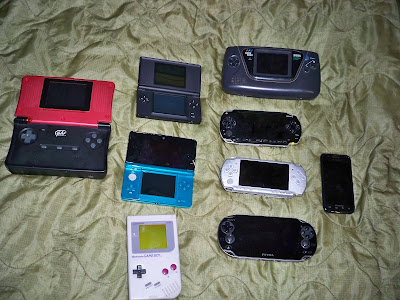 Portable SNES (from Yobo - a Chinese company) you actually put SNES cartridges right in the top of it. It also doubles as a SNES that you hook up to your TV, has it's own lithium-ion rechargeable battery and wireless controllers.

3DS - Actually my brother's 3DS, but it was in amongst the mess.

Gameboy - Got in a big ol buy from a co-worker whom had it sitting in her basement. There's a line down the side that cuts the image off, but still functional besides that.

Sega Game Gear - Ahh yeah. Gotta love stoner friends eh? Bought that and games off a friend back in high school one day he needed some cash quick.

Samsung Galaxy S - Not the newest beast on the block, but it plays Plants vs Zombies and Angry Birds... so it's gold in my books :P