A injection for PC gaming

So, I've been contemplating getting a newer PC for some time now. The iffy frame rates I was getting in GTA IV (especially if I ran it with the ICEnhancer mod) only solidified that feeling. Truth be told, I just upgraded my tower maybe a year (or two?) ago. Where I swapped out the mother board, added a blu-ray drive and plugged in an HD 5870 (1gb) card to get me to a level where I could play some more solid games. Technology being what it is, however, here we are again, feeling the tech pinch.

But, money isn't quite as loose as it was back when I did the last upgrade. Car payments and other bills seem to just eat at the bank account. Step in, Brother. lol. My brother, whom ditched his old tower (which would of been the tower I had 2 upgrades ago), frustrated with a slow moving windows XP and often crashing hard drive, went out and bought a laptop. Said laptop has served him decently in his quest for World of Warcraft, but he too is looking for an upgrade, especially with Diablo 3 coming around the corner.

So, he tells me what he's looking for and spots a tower in a local 'big store' that would fit the need. I tell him he could just pay me the money for mine and I'll go a head and use that towards a new one for me. Seeing that the tower I built matches almost exactly what he was looking for (and an offer to sell it to him cheaper than the tower at the store would cost), it seems like a win win.

The last... 3 PCs I've owned, I built myself and at a decent discount when compared to just buying the same thing already built, but this time around my brother wanted it soon... and building one from scratch, finding the parts, etc, takes some time. So I just went and ordered a pre-built system and swapped in a few other parts.

I ended up going with Newegg.ca (I've dealt with them before and have had no complaints) and grabbing this: 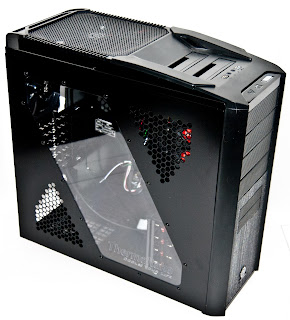 Ehh, actually that's just the case it's in. But you get the idea. It came with a DVD burner drive which I swapped out for a Blu-Ray burner, an added 3.5" bay port for 2 USB3 ports and an additional 2TB hdd.

The interesting part of this case is the top of the unit that includes two ports, that kind of resemble that of an SNES cartridge port that allows you to directly plug in SATA HDDs with a simple click. It's an odd feature, but one I've used already (took out my TB hdd from the old PC and copied over a lot of stuff I had on it to my new 2TB drive). I actually disconnected the top bay as I needed it's SATA cable/slot for my 2TB drive, but I've still got the lower one if I ever need this feature again. 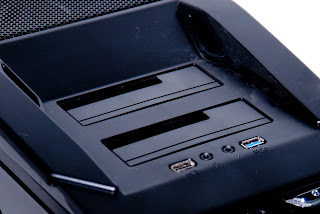 The company who actually put together the unit claims it has 'Custom Liquid Cooling', which I presume in on the CPU... as I took the tower apart and that's the only odd looking thing I could see. Cool bullet point, but, w/e :P

I've just been updating the hell out of it for the last day or so (you know, updating windows, drivers, getting essential software, codecs etc). I'm waiting for an upgrade for my GPU software/drivers and after that plan to install Photoshop (me without PS is not cool). I haven't done any gaming on it, really, I did manage to copy over all of my Steam games, however, it takes a little work to get steam to recognize that the content is there (technically, just copying the files over and then telling steam to download the game, only to find all of the content there, isn't exactly a straight forward way to do it, but it beats re-downloading the games and I've never had success with their backup utility).

Soo, I should be good for gaming... for a little while? I know in a year I'll probably think other wise... but hey. Still got my old monitor, the one with a green line going vertically down the middle. I figure, for the price of a good monitor, I'm okay with putting up with the line, for now. *Actually, I hardly notice it anymore, :P.

Kind of pumped to see what I can do with some more recent games. I was able to run RAGE just fine on my old set up, we'll see how it does with this one. Perhaps (if Steam throws it on sale) I'll see how Skyrim fairs (already have it on PS3, but like the idea of seeing it on the PC).