A weird title, I know. But, I've been spending some time on Listia lately, been trading some stuff off for credits, using said credits to get some cool items of my own, you know. But, forever (even now) people were putting up and trading these dumb looking Helicopter avatar items for 360 avatars, that came from playing Kinect Adventures (I think). Anyways, there were tons of them... to the point where it was hard to go through what was new in the video games section because they filled pages with them. So... what did I do? I bid 1credit each on like 50 of them in an attempt to get them and ensure they're never go back up on the site. 50c really is nothing, so it's not like it cost me anything.

Anyways, I've gathered a collection of codes that can be used to redeem the stupid little things. (*Believe it or not some people out bid me on some of them :S) Thought someone might like em? Ehh, they're free game! Have fun: 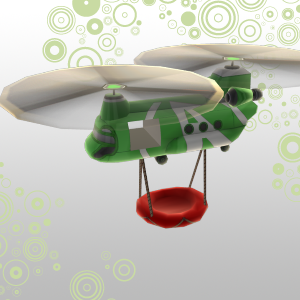