Street Fighter 25th: Sometimes collector sets are worth it 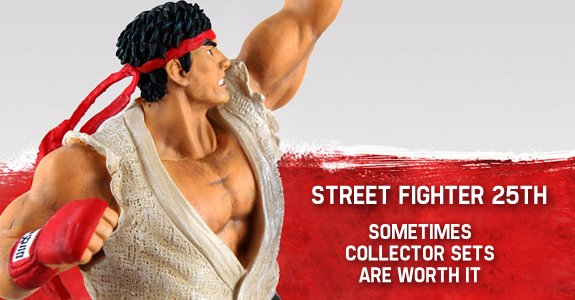 When it comes to collector sets, with any medium really, it's often a situation where the team behind it are making something of a love letter to fans of the content, or are looking to cash in.

My mother got me a nifty looking box one Christmas, housing the collector's edition of the Tron: Evolution PlayStation 3 game which turned out to be a rather cheaply made $150 (okay, $90, as the game was $60) Tron light cycle with case, as the sole item included in such a 'special' edition. I was happy with my gift and loved her for her thoughtfulness, but as a set, the company behind is was so milking fans for their cash. Had the quality of the product been bumped up, I can see it being worth it, especially for fans, but as it stood, it was a bit of a stinker at that asking price.

Then you've got sets that come along and are worth every damn penny you drop into the purchase. Street Fighter's 25th Anniversary box set is one of those very things.

One could argue that even more could of been packed into the set; and sure, that's always something some are going to argue, but I am completely happy with this set and would of kicked myself if I had chosen to cancel my pre-order (which is something I actually thought about doing, as the set went for $150 and I was short on cash at the time it shipped).

Bare with me here as I take you through the contents of said box: 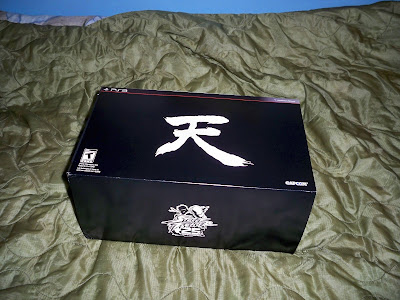 The box was contained in this cardboard sleeve, which too was in plastic, but here the plastic is removed. It's a heftier box than I had imagined. Which is a good sign, yes? 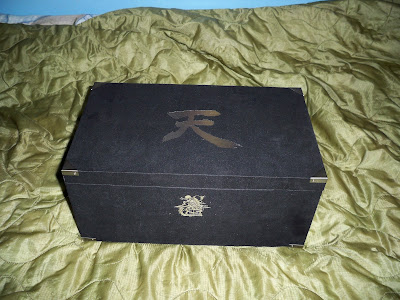 With the sleeve off, we've got a nice looking velvet like finish, with metallic logos and even metal on the corners for decoration. Let's pop this sucker open. 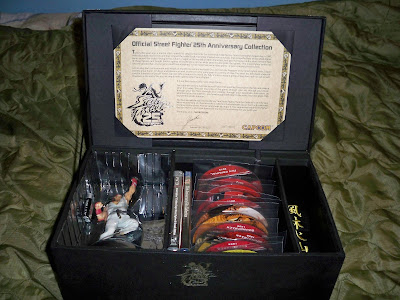 Open sesame. A mixture of cardboard and that faux-velvet material on the inside (it actually looks nicer than I detail), chunk-ing each section up into compartments. The top part of the box, shows the certificate with an address to fans written by Yoshinori Ono, along with an indication of the numbered box of the set (of 30,000 made). Behind that, is the large artbook for the set. 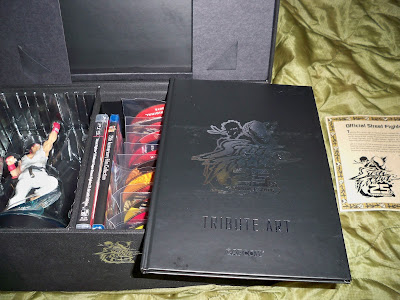 With the certificate aside, you can see the cradle for the book; the book itself is a soft feeling, hard cover book, filled with completely wonderful art pieces by fans. A lot of them are pulled from DeviantArt, but it's honestly a better showing than a book full of official art would of been, in my personal opinion. 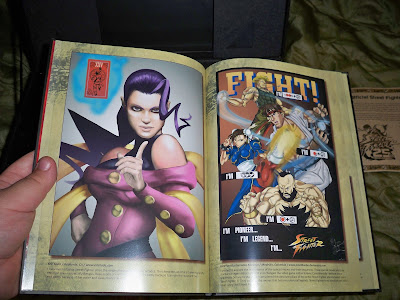 A quick example of the art and layout of the book. Each piece lists the artist, their website (or deviant art account) and a small section written by them about the piece or their fandom of Street Fighter in general. 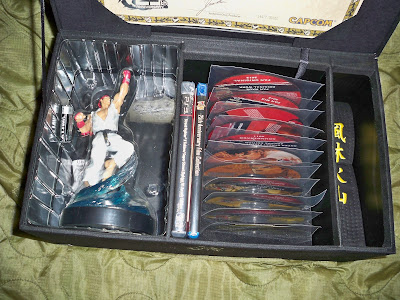 A hovering shot of the box (before I removed the book), showing the contents before I start plucking them out. On the left, the Ryu statue - which to my surprise actually takes batteries and lights up. The two PlayStation 3 games, Super Street Fighter IV Arcade Edition and Street Fighter X Tekken. A card with a code for Street Fighter 2 Turbo HD Remix, Street Fighter III: Third Strike Online Edition and DLC packs for SSFIVAE and SFXT. The Blu-Ray housing a ton of content, the 11 discs containing a head spinning amount of soundtrack content spanning the entire series and finally the full size replica Ryu belt. 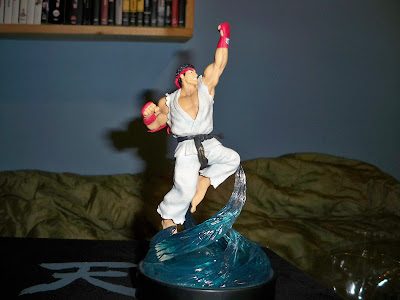 Ryu in all his glory. The build quality is decent. I've seen more detailed figures out there, but this is far from a cheap knock off. His iconic pose is held in place by those blue swirl pieces and are what light up. 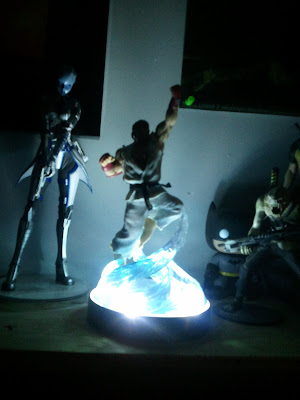 Took a shot in the dark to give you a feeling of what it's like. It's actually quite bright and has a better glow than this pic shows. (Image quality suspect on this shot, as it was in the dark, with my phone instead of my camera). 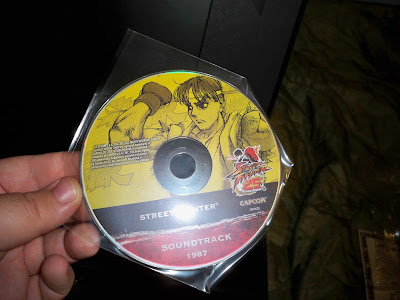 The first of many of the audio discs included in the box, giving a pretty extensive collection of the series' musical tracks. I believe there's even a 'fan's remix' CD included in the mix as well. I just took one pic and left the rest in the soft foam holding they're sitting it. 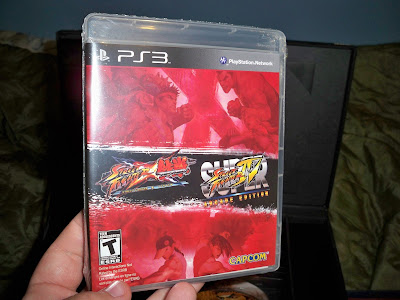 Now on to the thing that brought everyone into fandom, the games. Included in this pack is the Arcade Edition of Super Street Fighter IV and Street Fighter X Tekken. Both are housed on their own discs, in this single box. I haven't actually put them in my system yet (had SSFIV prior) but will at some point. The included code card (pic after this) includes a bunch of DLC for both games. 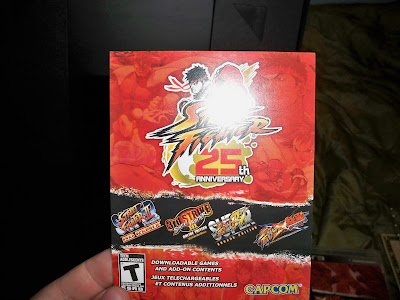 The 'code card' as I like to call it has a code on the back (just one sadly, not separate codes for each of the items) entitles a download of SSF2 HD, SF III 3rdStrike Online and a heft of DLC packs (costumes really) for the two disc based games above. 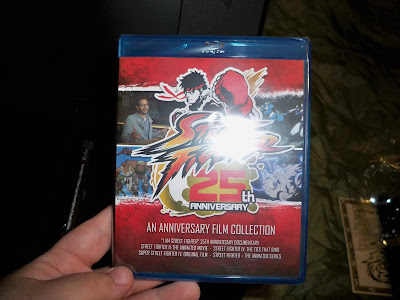 The Blu-Ray disc housed in the box is feature packed. It includes a documentary on the series, two Street Fighter IV featurettes, the SF2 animate movie and the original Street Fighter Animated series. Would of loved to see some SF Alpha content, but perhaps that's for another box set ;) 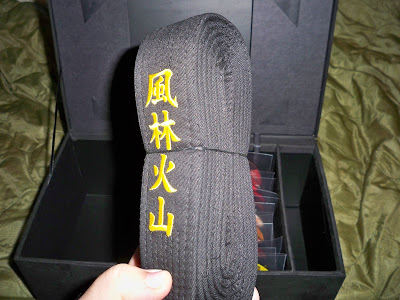 Last, but not least, is the mega cool, full sized replica belt that Ryu wears in game. Often times, collector sets end up packing in some kind of half-assed version of a replica, but this thing is well build. Quite impressed with it. Am I going to use it? No, probably not, but it's still very nice. Too bad they didn't include his red bandanna as well. 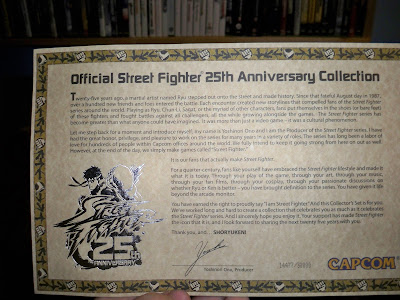 The last image I've taken is of the little passage, Ono wrote to fans, which I thought was kind of cool. Thought you might like a peak too.

In closing, I am so satisfied with this package and feel that a lot of love and time was put into it's production. Unlike other collector sets that feel cheap and more like a money grab, this one seems to have been made for the fans. I'd hope other companies take notice and see exactly how things are done. Sure, there could of been more things put into the set, but as it is, it succeeds as a wonderful homage to a great series.
at 10/22/2012 11:49:00 am
Labels: Games, Shopping
Newer Post Older Post Home