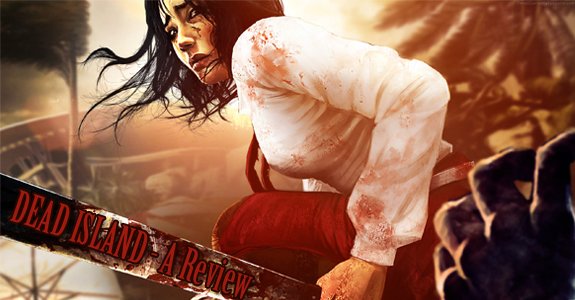 I'll start this off by explaining that it took me some time to get into Dead Island. I remember hearing about it at the time of released, but really didn't give it too much of a look over. There are tons of Zombie titles and I assumed this was yet another shooter trying to make a buck on the idea. Reguardless of their intentions or aspirations, Dead Island is a game I thoroughly enjoyed and still continue to do so.

I didn't get Dead Island until it was super cheap on steam and even then didn't get around to playing it until a friend asked me to play it with her on the PS3. I enjoy gaming with friends when I can, so I sought out and picked up a copy for like $20 and played a bit with her. I had no idea what I was doing, but it was fun. We played up until part way though the city bit of the story and then it got put on hold. But I've since then decided to make a new character and go about things myself to learn better how to play and to further experience the game. I'm glad I did.

The game is heavily focused on melee combat over that of shooting. Granted, each character has their specialty and one of them even specializes in guns, but you can go through the entire game using very little firearms and even if you happen to go the gun centric route, finding ammo isn't exactly easy for a good 80% of the game. I, myself, stick to sharp blades with my Xian Mei character as that was her specialty. Regardless of your ability or chosen weapon, all of your weapons come from pick ups and modifications you make to those. It's a very cool dynamic, creating weapons with electric, fire and poison attributes, but the weapons degrade so incredibly fast (even with perks to allow you up the durability). What plays out is a juggling of gathering a set up of awesome weapons that'll help you mow through the zombie hoards, collecting crap to sell for cash and spending that cash to repair them once you find a work bench to do so. In that regard there seemed to be a little too much back tracking or searching for repair places, forcing you to leave quests on hold to make sure you didn't run into a situation with no weapons to defend yourself.

Everything is played from the first person perspective and it's quite refreshing to see your character do every action they need, from their own eyes. It gives a better sense of envelopment and makes you feel more like it's you playing the life of the character rather than controlling some would-be hero. Timing also works into that fold as you have to allow time for a character's animation to accomplish and plan attacks. If a zombie is rushing you, make sure you have the distance and time to swing properly; sometimes a nice kick to make the undead stumble sure does help and as you gain levels, unlock new abilities, you'll gain character specific attacks that seem to make things easier. My fav thus far is Xian's head stomp, in which she does a big jump in the air with both feet and lands square on a downed zombie's head, completely crushing it.


There is your typical undead 'walker' that moves quite slowly, intent on gnawing on your flesh, but as you go on in the story, the types of enemies amp up in difficulty. The infected are just like the walkers, but with super speed and devastating arm bashing attacks, you can hear them coming as they scream at the top of their lungs on their way to you. Later on you run into bigger enemies whom will land devastating blows if you get near them, rush you and ram you to the ground, or even vomit poisonous bile on you, leaving you dis-orientated. You'll get accustomed to strategies on how to take each of these types of enemies down, but again, with timing, it can be tricky... and even as you get higher up in levels, it's not hard to have your health bar depleted quickly by a few walkers and some bad decisions on how to deal with them. Human enemies seem to offer much less a threat as they're a bit more predictable and for the most part stick to firearms as their chosen weapons. It's not hard to duck into cover and flank them or flat out put a bullet in their face with a pistol (it's mainly why I carried a pistol with me (just in case), it made clearing out nests of humans easier).

The first location seems quite tame in comparison to the rest of the game; A beach resort on the island of Banoi (a made up location) which is both beautiful and deadly. Zombies lurk everywhere and you get to spend quite a bit of time on the resort before being shifted off to a new location (which takes you through an infested hotel, a city, a jungle area and even a prison). All of which have a huge multitude of main and side quests you must complete for NPCs which help flesh out the story, give you helpful background information and more importantly, give you XP to level up your character. The character progression system is mostly centered around 'Perks' you get to choose at each level advancement. You don't much get to choose character stats, but you have choice of these perks which boost attacks and damage (among other attributes), allowing you to become a more efficient killer of the undead. You're going to need them, as mentioned above, the enemies are relentless.

You can enlist a friend (or 3) or some strangers to help you through the quests and they do help when every one is on the same page (friends work best in this regard), but it's kind of a mess when players want nothing more than to screw with you, kick you out of the game (even if you're hosting) or decide to play a later part in the game, which isn't the fault of the game or the developer, but it still sticks as a point of frustration. So.... more often than not, I stuck with my single player mode (which is exactly the same, sans help) which I hear is harder, but I didn't have too much issues with it as I like to take my time anyways and approach things with a bit of a tactical mind rather than rushing hoards in hopes I survive out of luck. Thankfully, Co-op is as easy as setting your player account to allow people to join your game and they can do so dynamically on the fly. It's much better than a separate mode that feels half cooked; especially when you can find decent people to play with.


At the end of the day however, the game has impressed me with it's atmosphere which sucks you in quite well and allows you to experience the terrifying idea of a zombie apocalypse from the eyes of a pretty average character. The game pulls the reins on you with weapon degradation and zombies that level up as you do, attacking you with some pretty powerful attacks so you never feel like a super powered hero whom nothing can touch. I've run into a few glitches that forced me to reset the system, but aside from those and the occasional douche-bag co-op partner, I couldn't be happier with the title. It's held my interest part way though with a friend, through an entire play-through by myself and still as I've started a new game with my finished character. Spectacular game, the likes of which I'm excited to see continue with the upcoming semi-sequel 'Riptide' and the prospects of a new title down the line.
at 3/19/2013 04:01:00 pm
Labels: Games, Reviews
Newer Post Older Post Home