Should I be concerned at my lack of resistance? 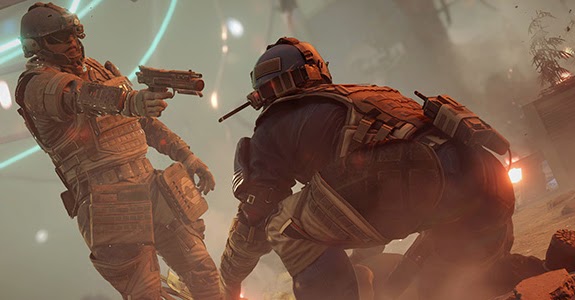 I jumped into the single player campaign on Killzone Shadow Fall on my PS4 the other day on something like Chapter 6 or 7, where I find myself navigating a structure that seems to be a kind of slums for the helghan people whom are oppressed by their government.

On entering the building, I'm given the choice to make a quick button press to prevent a man from sending a bullet through his scull at the protest of his wife. I instantly act, without knowing much about this man, to remove the gun from his hand and send him falling back with a smack. I kind of smile, pleased with the fact that I was able to help him out, as he's obviously distraught by his current living situation.

However, I then make my way up some stairs to a group of people laying or sitting around, some injured. A woman pleads with me to help her save her husband, to help in any way I can, as he lays on the floor bleeding. I walk around the couple looking for a button prompt that would allow me to somehow help (like in the previous situation), then look around the area for some kind of med kit or something to help the man. There is nothing. So I stand there, large assault rifle in hand, a bit mad that there is no way to help. Then, the wife changes attitude and in anger growls about my character (and his alliance) being just like the rest, that we're scum and don't care about the little people.

I put a bullet in her head.

Her body slumped over the husbands' and I was left, both a little surprised that the developers allowed me full control of my weapon (some games would prevent that in such a situation) and then even more surprised that my first reaction to an attack on my character, even verbally, was to pop off a shot to silence it. Sure, the game is a shooter and the helghast are the enemy, but it just kind of made me think when I so quickly popped off that round, about how that rings through my core.