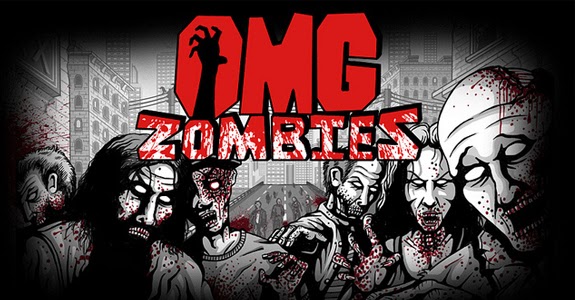 OMG Zombies is one of those games I seem to keep coming back to. I first found this little gem back in the PSP Mini's library and really enjoy it's unique style and strategic gameplay. I later purchased the upgraded title for my Vita and enjoyed it over once again. So of course I jumped at the idea of getting into the beta for the steam version and found myself playing it more than ever.

In OMG Zombies you take the role of a survivor/shooter, perched on top of something higher than the Zombie horde below you on a 2D single screen, encompassing the various obstacles and challenges of each map. Armed with just a sniper rifle and 3 bullets (which you can upgrade to 6 as you earn cash by completing levels), you are tasked with taking out the entire screen's worth of undead. An impossible task if one bullet equaled one zombie death, but this is where OMGZ's strategy comes into play.

Each and every zombie in the game has a chain reaction ability which helps take out other zombies around it. Some explode, some fire off gunshots of their own, others run through the level screaming (taking out others at their destination), some even melt into acid; all of which helps clear the screen and earn you the higher ranking, providing you with more cash and allowing you to beef up your abilities.

Each level has a Bronze, Silver, Gold and Platinum medal to acquire, each earning you more cash for upgrades. Don't get discouraged if you can only pull off the lower medal awards at first, it'll become easier once you've spent some of that award money on upgrades. Better medals open up more and more of the 100 levels included and you can go back any time to any level and try for a higher score; some levels being clear-able in a single shot if timed right.

Thankfully the mouse is the most precise tool for the shooting, giving you an advantage over it's previous versions (on PSP/Vita). The game runs wonderfully in windowed mode and goes along at such a pace that you can continually go back to it between browsing and chatting if you prefer (which I liked during my play for this review).

What unfolds is a game that feels a little over-powering at first, as you clamor to get even a silver medal, then opens up and gives you the upper hand as you progress, only to keep challenging you with levels that make you wonder how even 6 bullets will help you be victorious. Sometimes timing is key and you can sit there with hand on mouse for what feels like forever, trying to line up the perfect chain reaction.

Then when you've completed all 100 levels on platinum, you have the choice to start all over again in a prestige mode, in which you lose all your upgrades and must start from level 1 again. Reminding yourself just how hard it was starting out. If you're brave enough and have some serious time to dedicate to it, the game has an achievement for prestige-ing 20 times over.

The game isn't a super action romp and you shouldn't get it thinking it is. It's a strategic game that employs a very well ramped difficulty curve which makes for an engaging and addicting experience. I've enjoyed my time with it and feel it's well worth the asking price.
at 2/13/2014 02:24:00 pm
Labels: Games, Reviews 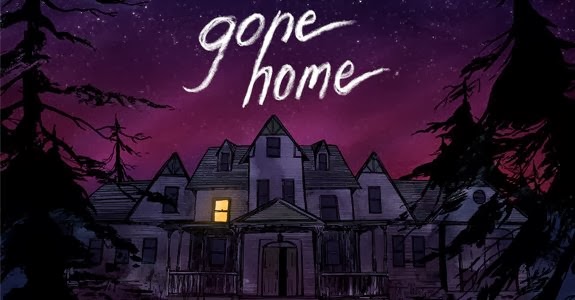 It's not too often I go into a game with a certain mindset or assumption of what it is and I end up playing something that unravels in a completely different way... but Gone Home has completely blindsided me in this manner and has left me impressed.

On first look, Gone Home seems to be a first person exploring horror title, not unlike titles like Frictional Games' Amnesia or Penumbra series', in which you're left to your own wit to solve puzzles and survive whatever evils are lurking around every corner. I started in on the game with this mindset and with a backdrop of a dark, seemingly empty house, raging thunder storm outside and hints at the house being haunted by it's former owner, it would seem to fit that very build. What unfolds is something far more interesting, touching and real.

One takes on the role of Katie, an every-day American girl whom has been away on a trip through Europe, returning to her families newly moved into home to find it seemingly abandoned. Dropping her baggage, I begin to explore the house, picking through cupboards, reading notes, listening to answering machines as I look around for some kind of clue as to why none of Katie's family is around to greet her. The entire house is littered with little clues to the story, items to pick up and examine, some of which work into puzzles strewn throughout. Katie reminisces when she finds things from her life growing up with her family and more specifically her relationship with her younger sister, Sam.

It's through Sam that most of the story unfolds, her audio journals speaking directly to Katie as if she was telling you the story. It's in this, that I began to suspect that the haunted house idea is indeed the 'soon to rear it's head' thing to deal with, with the death of the previous owner and the spookiness of the house is mentioned quite often. Later, secret panels, stairways and flickering lights give further suspicion and while it does indeed play a part in the over all story, it's much less than one would think. The real core of the story revolves around Sam and her life growing up in the area.

Each of Sam's diary entries bring you closer to the to final point of the entire narrative and I found myself lost in the story that unfolds as I explore the house. Sam and Katie's voice over pieces are very well done and help to add validity to this real feel of the tale. I also found myself excited to recognize items throughout the house as things from my childhood. Things like VHS tapes labeled with movies like 'Ghostbusters', 'BeetleJuice' and 'RoboCop' or the abundance of 'X-Files' references. SNES carts housing fake, but very well done mock ups of games made me smile and Street Fighter II references are made all over the place (the Chun-Li fighting combo list was extra special). All of which kind of brought me back to the past and added yet another layer of realism for me.

By the end of the game, I had spent just over 2 hours playing... which might be generous as I did explore quite extensively, making sure to read everything and listen to each audio log with great attention. It's not really the length of the game that matters though, but what feelings it stirs up and the way it gets you to weave your own visualizations of the stories that Sam unravels, which matters more. I found myself forgetting I was playing a game where I was exploring a house, concerned about spirits and other possible plot twists and instead felt as though I was reading a book that jumped around all of these experiences which Sam describes to her confidant, Katie. This, to me, is a lot more special and thus, more memorable than it would of been, had I played a game where I simply tried to survive some evil with my gaming skills.

The game's writing, nostalgic embrace and extra care to make the game about the story and the characters, rather than the player's skill to stay alive has made me a fan. I liken it to a beautiful short story, than that of a larger winding narrative and more of an experience than a full blown game in the normal sense of the word, but if you open your mind and play it for what it is, you may just enjoy it. I know I did.
at 2/01/2014 10:36:00 pm
Labels: Games, Reviews
Newer Posts Older Posts Home
Subscribe to: Posts (Atom)