A weekend of losing myself: Sword Art Online 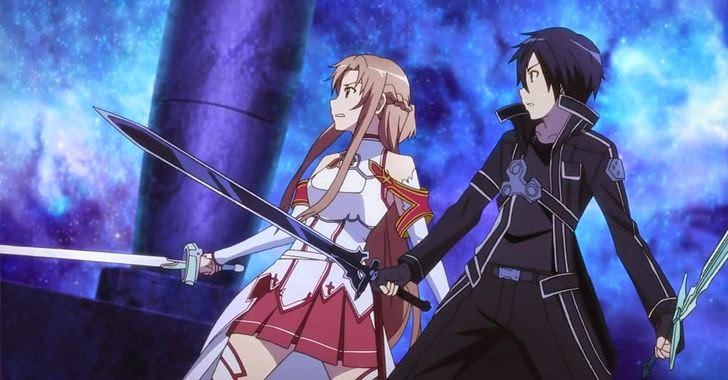 The name 'Sword Art Online' didn't exactly spring confidence in myself as something I would enjoy viewing. I am, after all, very picky when it comes to content I enjoy, that ringing true for anime the same as most mediums. However, during the end run of a illness that kicked my butt with a high level of success, I was left browsing Netflix for something to pass the time before sleep once again beckoned to me. SAO was chosen in a "Ehh, why not try it out" decisive click and the next two days, 25 episodes later, I'm officially a fan.

In SAO, we're introduced to Kirito Kirigaya, a gamer in the near future whom is plugging into a virtual reality MMO game on it's launch day, excited to get back into the game after participating in it's beta testing. Once he and the other almost 10,000 gamers log on and try out the system they're addressed by the game's creator whom tells them that they can't log out, if anyone tries to remove their VR headsets in the real world, they die, if they die in the game... they also die; the only way to escape the game world with your life is if one player can clear the game's 100 floors of increasingly challenging boss battles, thus completing the game.

It's not that crazy of an idea to think about, but the execution goes rather well. The character, Kirito is an interesting one as are many of the side characters he meets, teams up with or develops relationships with. It's in these relationships that the game tends to take on a stronger role than just that of a play thing. Characters start living as if this new life is their own, embracing it and giving up on the main point of the entire title itself (that of battling to become stronger and defeat the game). Some settle into roles of shop keepers, cooks, fishermen and what have you. Characters get married, start families and start living full lives... all in the realms of a fantasy world. The above aspect is incredibly interesting and I think is what pulled me into the experience. The idea of escaping into a different realm where an entire difference ecosystem exists is something I rather enjoy and find only in a few gems of universes, regardless of medium (be it books, movies, games etc). Which in of itself, is interesting too because I have yet to play an MMO game where I've felt something like that.

The story arc bugged me a little... as the entire concept from beginning to the conclusion of that story is finished in about 15 episodes, while the remaining 10 episodes, without revealing what happens in the arc of the first 15 episodes, pick up a continued story that has a different arc (yet with ties to the first). In the grand scheme of the anime's concept, it makes sense, but I question the staying power of the series if they jump story arcs that quickly. Regardless of that, I really enjoyed a lot of the characters, the themes they touched on as a series (Friendship, love, self confidence as well as death, loss and acceptance all work into it) and the connection that all made in such a short sprint of time.

I'm also excited for season 2 to finish getting made (and hopefully dubbed, as I enjoyed the English version). I nabbed a Vita game, titled 'SAO: Hollow Fragment', to help me stick with the universe until season 2 gets out, but so far, rather impressed with this series. Worth checking out :)
at 10/08/2014 11:42:00 pm
Labels: Anime
Newer Posts Older Posts Home
Subscribe to: Posts (Atom)